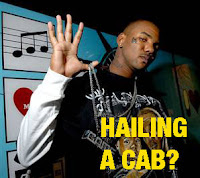 Not playing games with a MultiCultClassics Monologue…

• The Game isn’t playing, rejecting a plea deal for his police-impersonation case in New York. The artist is charged with jumping into a taxi last November, flashing a fake badge and telling the cabbie to speed to his destination. But The Game claims he never did it; rather, he insisted, “I told [the cabbie] to hurry up. Don’t drive crazy.” Actually, most cabbies are probably trained to drive crazy when rappers get in their cars.

• Wal-Mart is allegedly experiencing a rise in shoplifting and employee theft. Analysts speculate the stealing is tied to bad employee morale and the recent announcement that the retailer would no longer prosecute minor offenses. Perhaps “Always Low Prices” should be revised to read, “Always Low Morale and High Crime Rates.”

• The Kellogg Company announced plans to stop advertising directly to kids under 12 for certain products including Froot Loops, Apple Jacks and Pop-Tarts. Which means Toucan Sam is now available for beer and cigarette advertising.
Posted by HighJive at 11:49 AM