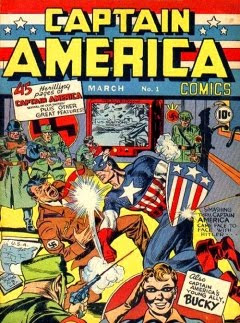 Hero was created as a response to Nazi menace

Joe Simon, who dreamed up the star-spangled super hero Captain America while riding on a Manhattan bus during the early days of World War II, died Thursday after an undisclosed illness. He was 98.

As a Jewish New Yorker reading the increasingly grim news out of Germany, he fantasized about fighting the Nazis when inspiration hit.

“Wherever I was, I’d always be thinking up new characters — the idea for Cap came to me while I was riding a Fifth Ave. bus,” Simon, who co-created the character with artist Jack Kirby, told The News earlier this year, as the major motion picture featuring their hero hit theaters.

“Captain America was designed to be the perfect foil for the Führer, and the Nazi Bund didn’t like the fact that we were making fun of their great leader.”

When the first issue hit the stands in March 1941, readers snapped up almost a million copies of Captain America Comics — which featuring the shield-carring hero punching Hitler square in the jaw.

“Tall, deep-voiced, cigar smoking, always armed with a quip or a wise crack, Joe Simon was my first boss at Marvel which was then called Timely Comics,” says Stan Lee. “He was an incredibly talented artist as well as a writer… I couldn’t have had a better mentor.”

Simon and Kirby eventually left Timely in a battle over profits of the comic book. The collaborators would go to rival National Comics and create the Newsboy Legion and Boy Commandos, popular books in their time. In the late ‘40s, when super heroes were falling out of favor, the pair created “Young Romance,” a comic series focusing on “true love stories” that spawned a slew of imitators.

After decades of legal battles, Simon reached a settlement with Marvel in recent years and had both his and Kirby’s names restored on the comic books featuring his most famous creation.

“Among many accomplishments in the comic book field, Joe Simon co-created one of the most enduring super hero icons — indeed, American icons — of the 20th Century,” said Marvel Comics editor in Chief Axel Alonso. “If there ever were a super hero who needed less explanation than the red, white and blue-clad Captain America, I’ve yet to see him.”

News of Simon’s death hits the comic book industry just a week after the death of another icon, Jerry Robinson, who was credited with creating The Joker.

Simon, a native New Yorker until his death, is survived by two sons, three daughters and eight grandchildren.
Posted by HighJive at 11:27 PM