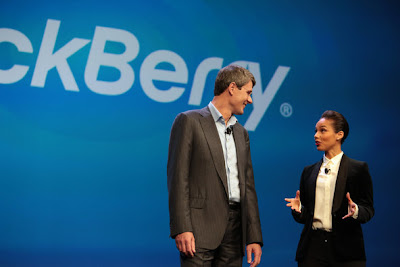 The Hollywood Reporter reported Alicia Keys dumped her iPhone to hook up with BlackBerry as its Global Creative Director—joining other notable recording-artists-turned-creative-directors including Sean Combs, Jay-Z and Will.i.am. Is it possible for a Black person to land a CD role without first winning a GRAMMY?

The pop sensation appeared on stage in New York City with Research in Motion CEO Thorstein Heins to unveil the new smartphone competitor to the iPhone and Google's Android software.

“Now we’re exclusively dating again, and I’m very happy,” Keys told the event after explaining why she briefly broke up with BlackBerry to date rival phones with “more bling.”

RIM will be hoping other creative types will follow.

Aiming to mirror the toy appeal of the rival Samsung and iPhone devices, the Canadian-based smartphone maker has signed a number of content partnership deals to enable video downloads and rentals of TV shows and audio on the much-delayed BlackBerry 10 platform.

To face down competition from Google’s Android software, RIM signed supply deals with ABC Studios, BBC Worldwide and CBS Corp., and Universal Music Group and Warner Music Group on the music side.

Other artists backing the BlackBerry 10 product include Doctor Who writer Neil Gaiman, who told the RIM presser via a pre-taped video that he will use the new smartphone to connect people around the world and “to tell some amazing stories and make fantastic art.”