10950: Bugged By Volkswagen And Deutsch. 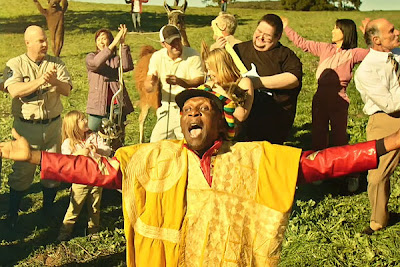 Advertising Age reported “advocates from the Caribbean-American and expat communities” have come to the rescue of Volkswagen, supporting the automaker against critics who cried racism over a new commercial featuring non-Jamaicans speaking with Jamaican accents. For the record, MultiCultClassics is not convinced the spot in question is racist. After all, Volkswagen had initially launched its “Get Happy” concept with Jamaican artist Jimmy Cliff, so the spot appears to be an extension of sorts. On an abstract level, is it really much different than Allstate showing people speaking with Dennis Haysbert’s voice? To be clear, this blog’s opinion doesn’t diminish or disqualify the critics’ opinions, as everyone is free to feel offense based on their personal perspectives. Regardless, MultiCultClassics does wonder about the “advocates from the Caribbean-American and expat communities” now standing behind Volkswagen. Do the pro-Beetle backers include the 100 Jamaicans and speech coach that Volkswagen and ad agency Deutsch allegedly consulted when producing the commercial? More importantly, do the advocates realize Deutsch reflects and represents an industry where Jamaicans and Jamaican-Americans are marginalized via advertising campaigns and employment practices? The supporters gushed, “In one fell swoop, the ad directors have superimposed Jamaicans’ reputation for being hardworking … as well as our reputation for having a laid back, positive, don’t-worry-about-a-thing disposition on the character of the Volkswagen.” Forget that the statement reads like the work of Deutsch staffers. Let’s see what happens if a hardworking Jamaican-American tries to land a job at an agency such as Deutsch. Would the advocates be happy to learn the truth about Madison Avenue?

Columnists for major media outlets including The New York Times and The Wall Street Journal have criticized Volkswagen’s Super Bowl spot featuring a white office worker speaking in a Jamaican accent for being racist, but the U.S. Caribbean community has issued quite a different response to the ad: “No Problem, Man!” Indeed, it’s condemning the critics themselves.

The U.S.-based Institute of Caribbean Studies and the and the Caribbean Heritage Organization, advocates for the Caribbean-American and expat communities, have issued a joint statement praising the spot, which was created by Deutsch, Los Angeles, and shows a Minnesotan man attempting to lift the spirits of his officemates on a dreary Monday by speaking to them in Jamaican patois.

“We find the commercial amusing and indeed a fascinating example of subtlety in subliminal messaging,” the statement said. “In one fell swoop, the ad directors have superimposed Jamaicans’ reputation for being hardworking … as well as our reputation for having a laid back, positive, don’t-worry-about-a-thing disposition on the character of the Volkswagen. And yes, the accent in the commercial is not perfect, but it certainly is recognizable.”

Moreover, the community singles out the ad’s critics, not its creators, for being the offensive ones. “What we find problematic and bordering on offensive are the mostly non-Jamaican critics, who contend that the commercial is racist, with some going as far as saying that it’s like putting a Black face on White and Asian,” the latter referring to a statement made by N.Y. Times columnist Charles Blow during an appearance on CNN.

“We hasten to assure the viewing public that being Jamaican, just like being American, is a nationality and not a race. Any one of the actors featured in the commercial could be a native Jamaican. … Most Jamaicans are of African ancestry (that is to say Black), but Jamaica also is home to a significant mixed-race and diverse racial population … in keeping with the Jamaican National Motto, ‘Out of Many One People.’”

According to the organizations’ representative, Marva Griffiths Herman, “What really got our attention was the word ‘racism.’ What’s so racist about this? Everyone in the commercial could be a Jamaican. It seems people aren’t aware of the rich heritage of the Caribbean people. My family and friends are of Chinese, African, Jewish descent. The oldest synagogue in the western hemisphere is in the Caribbean. There’s an overwhelming support in the Jamaican community for the ad.”

“I think the [critics’] assumption is that there are no white people who speak like that,” added Dr. Claire Nelson, architect for the campaign to dedicate June as National Caribbean-American Heritage Month. “The Jamaican accent is not a black accent.”

“The Volkswagen brand is known for being a sturdy, working-class car, but still has style,” she said. “It’s an iconic brand, so when you use a Jamaican accent to represent that—how can that be offensive? We’re quite tickled that of all the accents in the world, they picked a Jamaican one. Had it been an ad for a donkey cart, it might have been offensive. I’d like to go on the record as a Jamaican who’s very visible in the Caribbean community and has discussed this with many of my colleagues: ‘Let the ad go on.’ Our goal is to get as many people on board in support of the ad.”