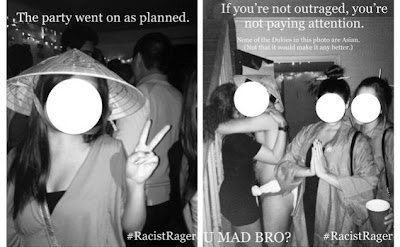 Duke fraternity suspended after hosting a party slammed as racist

A fraternity at Duke University has been suspended after hosting an Asian-themed party opponents dubbed the “racist rager.”

The invitation to the event, at first named “Asia Prime” told attendees “We look forward to having Mi, Yu, You and Yo Friends over for some Sake. Chank You.” The invitation also contained a meme based on the former North Korean leader Kim Jong Il’s character in the movie “Team America: World Police.”

The party’s name was changed to “International Relations” after opponents on campus got wind of the event. Angry students posted dozens of fliers around Duke’s campus urging people to boycott the “racist rager.”

The Feb. 1 party went ahead as planned, but ongoing anger over the event prompted the parent organization of Kappa Sigma to suspend the Duke chapter on Wednesday.

“The Kappa Sigma Fraternity finds that the actions which have been associated with this event are inappropriate and insensitive and Kappa Sigma does not condone such activity,” Kappa Sigma executive director Mitchell Wilson said in a statement. “This matter will be investigated and the fraternity will address this matter in an appropriate fashion.”

Duke’s chapter of Kappa Sigma had only just come back to campus last year after having its charter yanked a decade ago.

The party also led to protests on campus, with Asian student groups calling for an apology and a cultural shift at the prestigious school in Durham, N.C. They also posted Facebook photos of the event, with attendees faces blurred, around campus.

“This is not just about Asians, one party or one frat,” Ashley Tsai, a Duke senior told the student newspaper the Duke Chronicle. “This is a consistent thing happening. We want serious things to be done by the student body and the university so that this never happens again.”

At an on-campus rally on Wednesday, students from a variety of racial backgrounds chanted “racist parties make no sense.”

The fraternity this week apologized for hosting the party, saying the event should have been “completely canceled.”

“The Duke Community in which we exist is one that we see too often as divided, and while our actions have brought attention to and widened that divide, it is our sincere intention to work to contribute to a United Duke,” Kappa Sigma President Luke Keohane said in an email.

School officials said they were sitting down with Kappa Sigma to discuss how to deal with fallout from the party.

“The event was thoughtless and offensive but we’re not sure if it actually broke any rules,” Larry Moneta, vice president for student affairs, told the Herald-Sun.