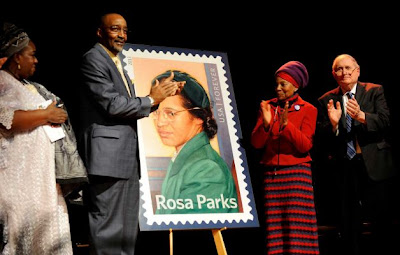 From The San Francisco Chronicle…

DEARBORN, Mich. (AP) — Hundreds of people, including some of Michigan’s political elite, gathered Monday to celebrate the late Rosa Parks on what would have been her 100th birthday by unveiling a postage stamp in her honor steps from the Alabama bus on which she stared down segregation nearly 60 years ago.

Parks, who died in 2005, became one of the enduring figures of the Civil Rights movement when she refused to cede her seat in the colored section of the Montgomery, Ala., bus to a white man after the whites-only section filled up. Her defiance and the ensuing black boycott of the city bus system helped the Rev. Martin Luther King Jr. rise to national prominence.

“This is being done in sight of the bus where future generations can sit in a seat where Rosa Parks sat and refused to budge and in a seat where the world was changed,” U.S. Sen. Carl Levin said before he and U.S. Rep. John Conyers, a fellow Democrat, pulled the curtain to reveal the Rosa Parks Forever Stamp, which bears her 1950’s likeness.

The stamp ceremony was part of a 12-hour event at The Henry Ford in celebration of the 100th anniversary of Parks’ birth that also featured speeches and live music.

At one point, officials cleared the vehicle and allowed Deputy Postmaster General Ronald Stroman — who as a young lawyer worked on Conyers’ staff while Parks worked at Conyers’ Detroit office — to sit on the bus by himself.

Stroman looked around the bus and gathered his thoughts before saying: “It’s such a powerful experience to be actually in the seat that Rosa Parks sat in. It’s almost emotional — very overwhelming to be here.”

The Parks stamp is the second in a set of civil rights stamps being issued this year by the U.S. Postal Service.

USPS launched the series Jan. 1 with the Emancipation Proclamation Forever Stamp, which was issued at The National Archives in Washington. In August, the series will culminate with the dedication of a stamp recognizing the 50th anniversary of the historic March on Washington.

Forever Stamps currently are being sold for 46 cents.

The Parks stamp went on sale Monday at post offices nationwide and at The Henry Ford, where dozens of people lined up to buy it, and nearby where collectors gathered to get their new stamps and other collectables stamped — or officially “canceled” — by a postal service employee.

Avid collector David Malhalab was one of the first in line to get stamps, pamphlets and other items canceled.

“Today is the Super Bowl or the championship game for stamp collectors,” he said, seated at a table surrounded by his various stamped collectibles.

“As we mark the 100th anniversary of Rosa Parks’ birth, we celebrate the life of a genuine American hero and remind ourselves that although the principle of equality has always been self-evident, it has never been self-executing,” the proclamation reads.

“I call upon all Americans to observe this day with appropriate service, community and education programs to honor Rosa Parks’ enduring legacy.”