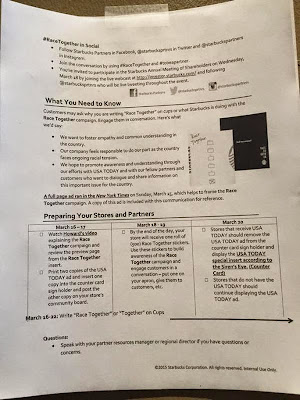 Business Insider presented: “Here’s the Starbucks internal memo showing the ‘Race Together’ campaign was always doomed”—detailing the obvious reasons why the effort bombed, despite the coffeemaker’s insistence that all was going as planned. What is it about race and diversity that compels typically sane people to do stupid things? It appears that Starbucks Chairman and CEO Howard Schultz doesn’t even understand his own business model, believing the long lines of customers waiting for over-priced beverages could accommodate the added task of chatting about culture. Give Schultz credit for not pursuing the contrived and clichéd tactics of minority barista intern programs or tax-deductible donations to ADCOLOR®. But #RaceTogether became #RaceToFailure in record time.

Memo to Howard Schultz: There were better ways to leverage the Starbucks experience to engage audiences. Simply pushing the discussions to the areas where customers hang out versus the lines would have worked better. Or create a promotion whereby people standing in line could Tweet a diversity idea to receive a discount on their purchase. Invite local and national thought leaders to deliver speeches and hold community coffeehouse conversations. Introduce special, limited-edition coffees with inclusive theme names. The possibilities are as wide and varied as the Starbucks menu.