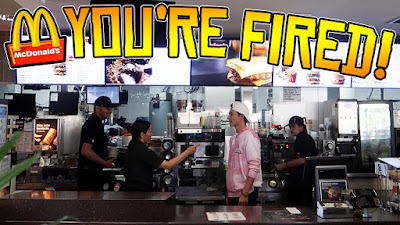 Advertising Age reported Mickey D’s put its local U.S. creative accounts in review, seeking to cut roughly 60 advertising agencies down to 10 or less. Wonder if any minority shops will get whacked in the process, losing their McCrumbs to local White advertising agencies. If so, thankfully, Mickey D’s White AOR We Are Unlimited is a diverse powerhouse led by DDB CEO Wendy Clark, whose restless ambition to bring diversity to the industry would certainly compensate for any local minorities adversely affected by the review.

McDonald’s is plotting another massive shakeup of its U.S. marketing model as it looks for ways to cut millions of dollars in ad costs and sharpen its messaging.

The Golden Arches plans to greatly reduce the number of creative agencies handling marketing for cooperative franchise groups that operate throughout the United States, Ad Age has learned. Some 60 or so agencies do local creative work for nearly 200 McDonald’s co-ops across the country, with some agencies handling work for multiple co-ops. McDonald’s aims to slash that figure to 10 or fewer, people familiar with the situation told Ad Age.

The scope of the work that they do is also expected to change, with less original local output and more emphasis on localizing national campaigns.

Some of the agencies until recently handled media duties on the local accounts as well. But all media duties for co-op marketing have been moved to Omnicom Group’s OMD, according to multiple people familiar with the situation. OMD was already McDonald’s media agency at the national level.

McDonald’s is simultaneously consolidating its co-ops into fewer, larger groups as it tries to become a more nimble operator.

The chain has been working for more than two years to become what CEO Steve Easterbrook has often called a “modern, progressive burger company.” Now, after last year’s national agency shakeup, followed by the addition of a new president of the U.S. business and a new U.S. chief marketing officer this year, McDonald’s wants to find a better way to tell its brand story. In the U.S., its platform comprises a mix of national and local campaigns.

McDonald’s confirmed the effort to trim its local agency roster. “Building the modern, progressive company that we aspire to be involves changing the way we conduct business,” McDonald’s spokeswoman Terri Hickey said in a statement. “In order to accelerate our efforts to engage customers across all platforms to advance our brand vision, we aim to streamline and modernize our local marketing efforts in 2018.” Hickey declined to elaborate.

Agencies currently involved in the RFP, which the people familiar with the situation said is being run by Select Resources International, are expected to present their pitches to McDonald’s and some members of the co-op team beginning on July 17. The group of agencies expected to pitch next week includes some that have already worked for McDonald’s co-ops and others that would be new to the business.

Select Resources International did not respond to a request for comment.

The overhaul of the co-op accounts comes less than a year after McDonald’s chose a new Omnicom model, an agency now called We Are Unlimited, as its main U.S. creative agency. That review, which was also handled by Select Resources International, did not affect agencies that worked with the regional co-ops, multicultural creative agencies, OMD and McDonald’s longtime PR agency Golin.

McDonald’s is preparing to shift more of its marketing resources to the national platform, run by We Are Unlimited.

Consolidating the co-op work among a smaller number of agencies is expected to give the world’s largest restaurant company and its franchisees better bargaining power. It may also give local co-ops a more cohesive marketing message, as one agency may do work for multiple co-ops either in the same geographic area or in areas in different parts of the country with similar demographics. Some people familiar with the RFP expressed concerns, however, that the local flavor currently found in local McDonald’s marketing may be lost.

And although moving all media to OMD should in theory reduce costs, one agency executive who has worked with McDonald’s for years believes it may be difficult for OMD to handle the all of the local media work without adding additional resources at the local level—which would, in turn, lead to higher costs.

The review comes after a series of executive changes at McDonald’s.

Chris Kempczinski was promoted earlier this year to president of U.S. business from exec VP of strategy, business development and innovation, the post he held since joining from Kraft Heinz in 2015.

Easterbrook has a long history at McDonald’s, though he left for a few years for roles at other restaurant companies before returning to McDonald’s and taking the CEO role from Don Thompson in 2015.

McDonald’s was the 33rd largest U.S. advertiser last year, with spending up 1.5% to nearly $1.46 billion, according to the Ad Age Datacenter.

The Hispanic agencies are about to get whacked hard.

We Are Unlimited's white team has been creating campaigns recently where they cast for "Hispanic/ambiguous" actors and models, cut out Hispanic agencies completely, and the only Hispanic ad person who ever touches the work is a copywriter or freelance AD.

McD's doesn't need or want a whole bunch of brown people in brown agencies when they can get the same work much cheaper (and whiter) in house. There's not much insight or depth to the advertising but hey, it's brownish on the surface.