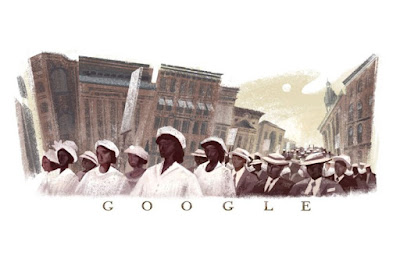 The Google Doodle for July 28 salutes the 100th anniversary of the Silent Parade in New York that covered Fifth Avenue to—appropriately enough—Madison Avenue. “Today’s Doodle commemorates the 100th anniversary of the Silent Parade,” explained Google, “and honors those whose silence resonates a century later.” Not sure what that last line means. Modern-day Madison Avenue doesn’t have enough Blacks to execute a line dance, let alone a parade. And when asked about its Black representation, Google resorts to being silent.