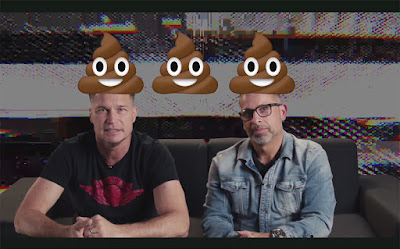 Advertising Age spotlighted a Havas video featuring leaders from the White advertising agency referring to BBDO, FCB and Leo Burnett as “shitty agencies”—which is essentially the port-a-potty calling the kettle black. Havas Creative North America CEO and Chairman Paul Marobella and Chief Creative Officer and Chairman Jason Peterson contended the other shitty shops were not competitors; rather, the real competition is “kids with iPhones and millions of YouTube followers.” Okay, but Havas isn’t even capable of competing with BBDO, FCB and Leo Burnett, so facing off against iPhone-packing wunderkinds is an even greater challenge for the creatively-challenged outhouse. Oh, and the animated poop emojis probably make Marobella and Petersen appear old and outdated to their kiddie opponents. However, the images feel really appropriate on their empty noggins—they’re the crowned creators of crap. The video was intended to be an internal communication, avoiding companywide emails that suck, according to Messrs. Marobella and Petersen. Um, mission not accomplished. As the old ad saying goes, “Today’s layout is tomorrow’s toilet paper.”