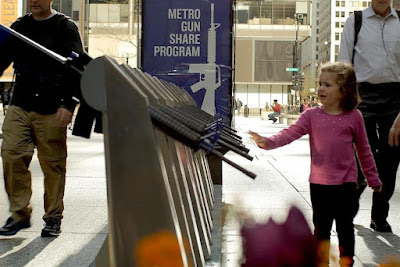 Campaign reported on a concept by The Escape Pod for the Brady Center to Prevent Gun Violence, featuring a bike-sharing station turned into a rifle rack, presumably intended to highlight the ease of obtaining firearms. Campaign wrote, “The 18ft-long structure features signage to highlight the disparity between Illinois and neighbouring Indiana state gun laws.” Not sure what Campaign meant to imply with that statement. According to The Chicago Tribune, Indiana gun laws are much less stringent than Chicago gun laws, thanks in part to Vice President Mike Pence, the former Indiana governor. Plus, it’s more than a little naïve to combat gun violence with a publicity stunt. But advertising agencies are forever eager to shoot for awards by any means necessary—including patronizing promotions.

Why Chicago hopes this installation will spark discussion around gun crime

A row of 10 replica rifles have been installed in a bike-sharing station in Chicago to show how easy it is obtain a weapon.

It also has an iPad for donations to the Brady Center to Prevent Gun Violence. The organisation is asking people to share the campaign on social media with the hashtag #GunShare.

Nicholas Berg of Ojo Customs built the installation. US brand experience agency The Escape Pod worked with the Brady Center on the activation, which is running from 10 to 16 May.