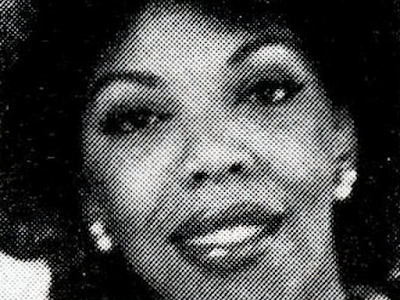 Barbara Gardner Proctor, a trailblazing Chicago businesswoman who brought the Beatles’ music to America—literally—as a Vee-Jay Records executive, has died at 85, according to her son, Morgan.

He said she died Dec. 19 at Chicago’s Fairmont Care Center after falling and injuring her hip, adding, “She was in the throes of dementia.”

Proctor was best known as the founder, in 1970, of the first ad agency owned by an African-American woman. She borrowed $1,000 from a friend in the Count Basie Band and rented space above Pizzeria Uno. Her billings grew into the millions as she labored to land Jewel Food Stores and then Kraft and other mass-market consumer companies as clients.

In 1983 she was featured on “60 Minutes.” The next year, Ronald Reagan cited her in his State of the Union address as a “spirit of America” who “rose from a ghetto shack to build a multi-million-dollar advertising agency in Chicago.” The Washington Post described her East Wacker Drive offices as “glitzy plush.”

But as established advertising firms slowly warmed to the black consumer and other African-Americans started competing firms, Proctor’s business declined, and her dream of creating another Leo Burnett died. Her firm dissolved in 1995.

“It is not, in any way, easy to be a minority company, and as I am a woman and black, it has been a double minority situation,” she told the Tribune five years earlier. She named her firm Proctor & Gardner Advertising, to give the impression of a white male behind the curtains. (A resemblance to Procter & Gamble didn’t hurt.) It would take seven more years before a black female became a major ad agency vice president.

Judy Foster Davis, author of “Pioneering African-American Women in the Advertising Business: Biographies of Mad Black Women,” calls Proctor a hidden figure of the ad industry. “She didn’t just see advertising as a business enterprise. She saw it for its ability to lead social change,” Davis told Crain’s.

Proctor’s story was every bit the tale that Reagan made it out to be.

Born to an unmarried 16-year-old in North Carolina, she was raised by grandparents in a dirt-floor shack with no running water or electricity. She got a teacher’s certificate from Talladega College in Alabama and was headed to back home after serving as a camp counselor in Kalamazoo, Mich. First, she detoured to Chicago buy clothes for her teaching assignment.

“I wound up spending all of my money and didn’t have bus fare to get home. And in large measure, for 30 years I’ve been trying to get my bus fare back to North Carolina,” she told the Tribune in 1990. She volunteered at the Chicago Urban League, which surprised her with a paycheck, and became a jazz critic for Down Beat magazine.

As international director of black-owned Vee-Jay in the early 1960s, she traveled to Europe four times a year “when black people were hardly flying in airplanes,” Davis says, to swap records with other recording companies. In late 1962, she took stacks of Four Seasons records stamped out by Vee-Jay and returned with singles recorded by what Vee-Jay publicized as “England’s No. 1 Vocal Group”—the Beatles.

“Please Please Me,” with “Ask Me Why” on the flip side, didn’t make much of a dent in early 1963. A year later, though, it went to No. 3 on Billboard’s pop chart with “From Me to You” on the B-side. Keeping it from the top spot were two Beatles songs released by Capitol Records, “I Want to Hold Your Hand” and “Can’t Buy Me Love,” and another from Swan Records, “She Loves You.”

Proctor, who said she wanted to learn how to write short, left Vee-Jay to work as a copywriter for two Chicago advertising firms, one of which became True North. Besides the $1,000 loan, she talked the SBA into lending her an unsecured $80,000 to fund her fledgling firm.

“I told them to call three advertising agencies and ask them what kind of annual salary they would pay to get me as a creative director. I said I’d take that to start a company. And that’s what they did,” she told the Tribune. “I think it worked because they hadn’t heard the approach before and they didn’t have an excuse built up to turn it down.”

Besides Kraft, she scored blue-chip clients like Illinois Bell, Alberto-Culver and CBS-TV’s Channel 2, and billings grew to a reputed $12 million by 1992 before an economic recession and the defection of Illinois Bell cut that in half. Davis says Proctor’s status as a single mother limited her ability to drum up business outside Chicago.

“We really wanted the Jewel business, but she had the inside track,” says Burrell. “The one thing she knew, she knew how to sell—she knew how to position herself.”

Proctor sensed where the industry—and world—was going when she formed an internet advertising firm, Proctor Information Network, in 1996 with other investors. But the plan stalled.

In her latter years, she provided expertise for Rainbow/PUSH, according to Charles Colbert, who was a communications consultant for Proctor & Gardner.

Steven R. Strahler is a writer at Crain’s Chicago Business 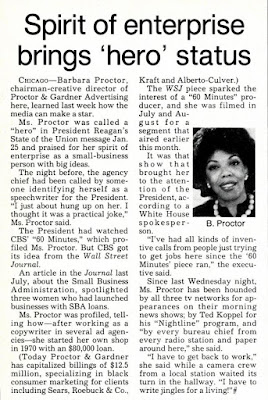 "(General market) agencies are very decidedly going after ethnically targeted business,” is how the industry went from entire agencies of POC in years prior to Black women being only 1% of the equation today.

Left to their own devices, white people with agencies and power will behind diversity statements, diversity initiatives, and token diversity executives used mainly as heat shields and deflection.

Then they'll simply hire and promote and guard the best opportunities for other white people that remind them of themselves, every single time.