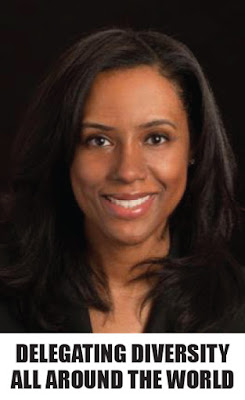 Adweek reported Ogilvy hired a new Worldwide Executive Director for Diversity and Inclusion, which essentially sounds like the White advertising agency is delegating diversity across the planet. Has Ogilvy succeeded yet in achieving equality on a single continent—or even one city? How about in a department at a satellite office? It’s been nearly a decade since Ogilvy honcho John Seifert admitted the industry is “not exactly leading the way” with diversity and inclusion. Now he’s out to conquer cultural cluelessness globally. Gee, Seifert might complement his ADCOLOR® trophy with a Nobel Peace Prize.

Ogilvy Brings on Worldwide Executive Director for Diversity and Inclusion

Olden has worked and lived in the U.S., U.K., Germany, Italy and Sudan, and she’s implemented diversity and inclusion initiatives in more than 50 countries across Africa, Asia, Europe, the Middle East, North America and South America. The agency said this makes her the ideal candidate to globally expand the programs it has established around those issues in the U.S. The programs will be adapted to meet each individual region’s needs.

Most recently, Olden was the global inclusion lead for London-based insurance company Aviva. There, she persuaded senior executives to expand their global inclusion targets to include race and ethnicity. Prior to that, Olden was the first head of diversity and inclusion for the United Nations World Food Program, where she oversaw the establishment of the U.N.’s first women’s leadership development program. She’s also led diversity and inclusion efforts for Barclays Capital and Credit Suisse, among others.

“We’ve been on an incredible journey to reach our goals,” Pedro told Adweek, noting that hiring Olden is the next phase of the plan. “I am excited to bring Yashica, who has such a wide range of extensive global experience, to the table.”

During Cannes 2018, Ogilvy committed to advancing and recruiting 20 senior women into creative leadership roles by 2020 while developing a pipeline for women of color. It also recently expanded a U.S. pilot program called “30 for 30” it established three years ago to support and elevate “high-potential female talent” to Latin America, Asia-Pacific and Europe, the Middle East and Africa.

Pedro said Olden will focus her first 60 days on implementing similar diversity and inclusion initiatives in EMEA and then Latin America.

In focusing on EMEA initially, Olden told Adweek that she will focus on expanding Ogilvy’s gender wage gap report (which any U.K. company with more than 250 employees is now required to release annually) to include other metrics, such as race.

“Outside of the U.S., race is rarely discussed,” Olden noted. “People talk about nationality or culture, but particularly Europeans are shy to talk about race.”

As she starts to flesh out plans for other countries, Olden said she will concentrate on ensuring there are programs in place to support people with disabilities and those who identify as LGBTQ. That will include setting up “allies networks” for people in regions where they may not feel safe.

“In places like Singapore, it’s still against the law for people of the same sex to be in a relationship,” Olden said, adding that this will be taken into consideration when relocating employees, if need be. “You might not choose to move someone who is openly gay to a place that is openly hostile.”

Olden said her main goal in this role will be championing Ogilvy as an organization that welcomes and accepts everyone, no matter the country and its specific laws.

“The key to this is—and it’s what I’ve done in other organizations—to just be consistent in your messaging,” Olden said. “Often, as Americans working in diversity and inclusion, we really only have [one] lens. As an American who has worked in diversity and inclusion for 20 years [in various countries], I can much more easily translate what diversity means in other cultures and where there’s going to be major challenges.”

I don't ever want to hear Ogilvy say so much as boo when it comes to their thoughts on diversity in the ad industry. Not after their taking millions of dollars to scrub the reputation of concentration camps.

As a matter of fact, if you want to see how far the ad industry at large has come in terms of diversity, look to Ogilvy. The answer is, it never left the 1950s, no matter how many VPs of Diversity and divertsity initiatives they claim to support.