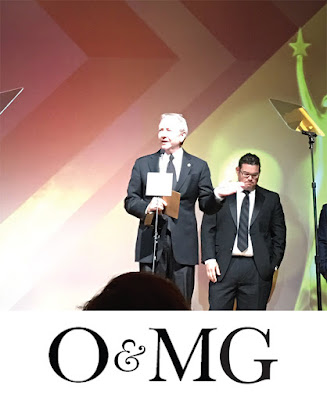 Campaign reported on the oh-so-deserving award winners at the latest ADCOLOR® shindig. Saatchi & Saatchi NY nabbed “Ad of the Year” honors for a video produced in partnership with a Down syndrome advocacy group. Given the culturally clueless controversy involving ex-Saatchi & Saatchi Chairman Kevin Roberts, perhaps the trophy should be engraved with an asterisk. Additionally, Ogilvy & Mather Worldwide CEO John Seifert received the Change Agent Award, allegedly bestowed upon talented and powerful individuals who promote inclusiveness and positive change. Um, Change Agent might apply to Seifert if it means tossing chump change at the problem or having a tendency to change the subject whenever asked to explain the dearth of diversity in his own White advertising agency. It was probably a close contest between Seifert and Donald Trump.

The ad for CoorDown, a disability advocacy group, starred Olivia Wilde as the self-image of a woman with Down syndrome

The anti-discrimination ad “How Do You See Me” by Saatchi & Saatchi New York won the Ad of the Year Award at the 10th Annual AdColor Awards—the industry’s premier event recognizing work that promotes diversity and multiculturalism—at The Boca Raton Resort & Club Wednesday night in Boca Raton, Florida.

“How Do You See Me” features actor Olivia Wilde as the internal self-image of Anna Rose Rubright, a woman with Down syndrome, created for the disability advocacy group CoorDown and timed to coincide with World Down Syndrome Day on March 21. The Ad of the Year honors “a campaign or single execution that pushes boundaries, promotes conversation and highlights the lives of multicultural, LGBT and/or other under-represented Americans in the mass media,” according to AdColor.

The other nominees for the Ad of the Year were “Greenlight A Vet” for Walmart by Saatchi & Saatchi NY, “Inside Out” for Lexus by Walton Isaacson, “This is Wholesome” for Honeymaid by Droga 5 and “Turn Ignorance Around” for CHIRLA Action Fund by Walton Isaacson.

The Rising Star Award, given to an up-and-comer with less than seven years’ experience in the industry, was awarded to Babette Sullivan Puebla, senior copywriter at The Integer Group. The other nominees were Christopher Corales, associate manager for consumer insights at Dr. Pepper Snapple Group and Haywood R. Watkins III, associate creative director at Group SJR.

Ogilvy & Mather Worldwide Chief Executive and CEO John Siefert won the Change Agent Award, given to a person who uses their talent and position within a company to foster inclusiveness and positive change. The other nominees were Tiffany Smith-Anoa’i, executive vice president for diversity, inclusion and communications at CBS and Kiran Chaudhri Lenz, associate director, operations program management at GTB.

The Innovator Award, for imagination and breakthrough developments, was awarded to Stacey Hightower, chief operating officer of Group E DAS, a division of Omnicom Group. The other nominees were Sheila Marmon, founder & CEO of Mirror Digital and Marion Dickson, global head of YouTube social and influencer marketing at YouTube.

And writer and speaker Luvvie Ajayi, founder of AwesomelyLuvvie.com, won The Rockstar Award, given to a visionary leader within the industry. The other nominees were Keith Clinkscales, chief executive officer of REVOLT Media & TV and Erika Bennett, vice president, African American marketing at Allied Moxy.

The AdColor Awards cap off four days of events and panels at the 10th annual AdColor Conference. Attendees discussed topics that affect the ad industry and people currently underrepresented within it, like Black Lives Matter, Oscars So White and the rise of discriminatory rhetoric during the 2016 presidential campaign. Speakers included representatives from companies like Apple, Facebook, Diageo and Bing. Twitter released a custom emoji, designed by GSD&M and available for use through October 13 with #ADCOLOR.

That's a pretty good thing the ad agencies and holding companies that pay into Adcolor have going on, isn't it? That million dollar budget they have every year doesn't come from individuals impressed by their gosh darn good efforts diversifying the industry. It comes from the very organizations that benefit from the awards they give out.

Those agencies and holding companies get guaranteed heat shield benefits whenever discrimination claims or lack of progress in hiring anyone of color comes up.

"Oh, we're committed to diversity! We're so well respected for our commitment to diversity that we're an ADCOLOR winner for our massive diversity efforts, see?! Actually, we're doing more than the industry standard, that's why we have an ADCOLOR award!"

That's how a company that only hires and promotes white people (look at the credits and hiring track record of the agencies that win through the years, it's eye opening) can walk away as a Champion of Diversity and not do anything other than make a sizeable donation the other 364 days of the year.

ADCOLOR doesn't celebrate diversity as much as it ensures the status quo and contributes to no forward progress in hiring POC.

It was so obviously the industry's direct response to possibly having to crack their racist hiring record wide open. Instead of doing anything about the hiring issues, they just pooled their money together and created ADCOLOR as an "awesome show of diversity support".

Now, 10 exactly years later, we're stuck with ADCOLOR. It didn't fix or address any of the diversity issues, it just created a smoke screen that the holding companies could hide behind (Omnicom especially, which funds the bulk of it).

What I don't get is why it has gone on so long. Cyrus Mehri is pretty obviously never going to do anything involving ad agency diversity again, no one else is on the horizon to address industry wide diversity issues in America, and other than a line or two that goes on each agency's website ("We are proud supporters of diversity as seen by our support of the ADCOLOR Awards") there's not much serious ACTION (action, not talk) about the POC hiring issue.

A "Diversity and Equality" jury made up, primarily, of white females and foreign visa holders who don't give two shits about diversity when it comes to ethnic minorities.