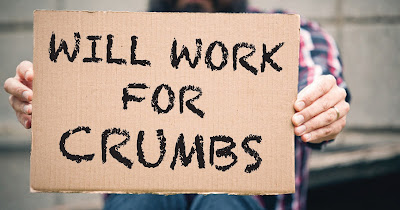 The Wall Street Journal reported that Y&R may have won the 2020 U.S. Census account by underbidding rival White advertising agencies by as much as 50%. Hey, the $14 million bid is a mere fraction of WPP Overlord Sir Martin Sorrell’s take-home pay—in fact, it’s a fraction of his annual bonus money. The lowball tactic also means any minority firms inevitably partnering with Y&R will receive even fewer crumbs than normal.

When WPP ’s Y&R announced earlier this year it had won the coveted U.S. Census account, industry executives speculated that the creative agency had come in with a low bid.

Now it’s becoming clear just how low its price was.

A team led by Y&R submitted a proposal for the three-year deal that would cost the government agency about $14 million, far lower than the bids submitted by four other players, which ranged from roughly $25 million to over $30 million, according to people familiar with the matter.

The Census, which is readying a big advertising, media and public relations campaign in its effort to collect data on U.S. citizens for its 2020 report, is estimating a total budget of $415 million to cover its integrated communications contract, according to request for proposals agencies received.

The project will include traditional and digital advertising, media buying, public relations, social media and research, and data and analytics, among other elements.

Y&R was at the top of the list on the “technical” ranking, a measure of how well agencies could perform the work, according to the document and people close to the process.

Y&R’s low bid raised competitors’ eyebrows, the people said. Agencies often take on business at a discounted rate if they’re looking to create momentum during a slow period, or to do business with a sexy brand. Typically, however, the low bid is only incrementally lower than the others, according to people familiar with agency reviews.

“Agencies low-bid things all the time, but half as much is pretty drastic,” said Casey Burnett, founder of the agency search consultancy The Burnett Collective. “Sometimes it’s because the agency wants the business as a marque account,” while other times “it’s simply because they didn’t understand the [scope of work]. Sometimes they hope to convince the client to pay more later.”

It’s not immediately clear what inspired Y&R’s bid, or how it plans on structuring the Census account. It’s possible the agency has set up a cost structure that will allow healthy profit margins, despite its relatively low rate.

For its latest win, the WPP shop will need to pull in resources from various agencies and engage in a hands-on effort that’s unique to the Census. Promoting the Census requires reaching people from various cultures and ethnic backgrounds, and using different media at a hyper-local level, from posters to flyers to mobile apps, according to people familiar with the account.

“Effective and strategic communications with many diverse audiences will be crucial, including everything from educating the public about the process to maximizing response rates,” according to the Census’s request for proposals.

An agency group that understands technology will also be crucial to the Census project, according to the RFP.

Y&R has been in talks with PwC about a partnership on the account, according to people familiar with the matter. Consulting firms like Accenture, Deloitte and PwC have been investing in digital marketing capabilities in the past few years and are now even moving into the creative business, hoping to pitch their technological know-how to marketers. Some ad agencies, meanwhile, have dipped their toes in consulting.

The Y&R team will also include support from WPP shops Burson-Marsteller, Maxus, Bravo, Wunderman and Hogarth, among others, said a spokesman from the U.S. Census. Y&R is also working with a number of small businesses that specialize in reaching niche groups, such as G&G Advertising, which is tasked with reaching American Indian and Alaska Native communities.

If there's a way for Y&R and its holding company to screw small and minority owned partners out of even the smallest crumbs, they'll do it.

I can think of at least one scam pulled by a holding company on a recent US gov. account, where they put their minority owned agency as a lead on paper, and on the contract, and once the account was awarded paid them a small fee NOT to participate.

The white agency (preferred darling of the holding company) got to do all the work instead, all the creative, all the media buy, and earn all the awards and accolades.

Minority agency had hired a lot of staff presuming they'd get to, you know, staff, and had to fire them once it became clear they weren't going to be able to touch the cake OR the crumbs.