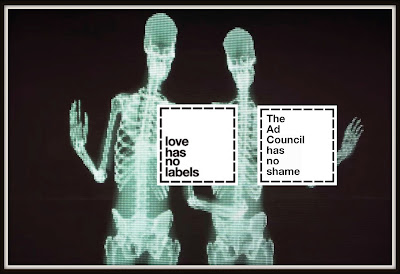 Adweek reported The Ad Council and White advertising agency R/GA won an Emmy for the Love Has No Labels campaign. Ironically, the Emmys were recognized for the diversity of nominees this year. Are the Academy of Television Arts & Sciences, the National Academy of Television Arts & Sciences and the International Academy of Television Arts & Sciences ignorant to the obscene hypocrisy involved with the promotion of love and inclusion coming from an exclusively White advertising industry where diversity is a dream deferred, diverted, delegated and denied? The Ad Council President and CEO Lisa Sherman gushed, “We are so grateful to everyone who has watched and shared the PSA, and taken our message of love and inclusion to heart.” Um, take a look in the mirror—as well as in the hallways of R/GA. Meanwhile, R/GA Vice Chairman and Global Chief Creative Officer Nick Law declared, “…[O]ur greatest hope is that this commercial contributes to a more thoughtful and accepting America.” Hey, why not start with a more thoughtful and accepting advertising industry?

First Emmy win for a PSA

Count Emmy Award voters among the slew of people nationwide who’ve been charmed and captivated by The Ad Council’s famous, viral “Love Has No Labels” diversity and inclusion PSA campaign, created by R/GA.

As Adweek predicted when the nominees were announced, the spot, filmed on Valentine’s Day in 2015, won the Emmy Award for Outstanding Commercial at the Creative Arts Emmys on Saturday at the Microsoft Theater in Los Angeles. It’s the first such win by a PSA in Emmy history.

The ad features an X-ray screen with human skeletons seen dancing, hugging and kissing. Eventually the humans themselves walk in front of the screen. Each reveal shows a loving couple who represent different religions, races, disabilities and so on, demonstrating that “love has no labels.”

The video beat four brand spots to take the coveted prize—Gatorade’s “Dear Peyton” by TBWA\Chiat\Day; Snickers’ “Marilyn” by BBDO; Honda’s “Paper” by RPA; and Google’s “Year In Search 2015” by 72andSunny.

“We are thrilled to be recognized by the National Academy of Television Arts and Sciences with this award and want to thank our extraordinary brand and media partners who have helped make the campaign such a success,” said Lisa Sherman, president and CEO of the Ad Council. “We are so grateful to everyone who has watched and shared the PSA, and taken our message of love and inclusion to heart.”

“It’s satisfying when the work that you believe in so passionately is watched and shared by so many people,” added Nick Law, vice chairman and global chief creative officer of R/GA. “But our greatest hope is that this commercial contributes to a more thoughtful and accepting America.”

The campaign has been supported by brand partners including Bank of America, Coca-Cola, Google, PepsiCo, P&G, Unilever, State Farm, Wells Fargo and others, and by an advisory board of nonprofit partners, including The Perception Institute, the Southern Poverty Law Center and the Anti-Defamation League.

The spot has been viewed over 160 million times, making it the second most viewed social and community activism video of all time, according to the Ad Council.

You won't ever see a minority driven team winning for any AdCouncil PSAs because the AdCouncil drives all the best Emmy-level work to their white agencies and white partners.

Minority agencies and teams get stuck with regional TV-level work, or creative castoffs, or having to translate General Market campaigns, or cutdowns from existing campaigns, or nothing at all. Certainly nothing that would earn an award like this.

If AdCouncil really cared about fairness and ending discrimination, they'd end the practice of the best and most expensive work going to all-white General Market agencies, and allow an ethnic one (if there are any left in a year, see Pepper Miller's last column) to do something other than have to dig in their pockets and pay for castoff work out of the kindness of their heart.

Not a single ethnic ad agency in American can compete against a General Market one to win an Emmy if the playing field is unlevel from the start due to the way AdCouncil doles out campaigns and resources. They are not "ending discrimination", they're contributing to it and have been for years.