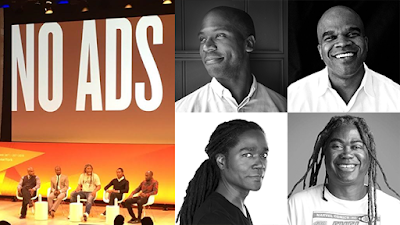 They also named two new potential brand partners in the form of P&G and Airbnb.

Cartwright said that the group’s initial letter, which they sent to press organizations on Aug. 1, has inspired more than 800 emails regarding their stated desire to “build awareness, promote change and shift the overall perception that black lives are in some way not as important as others.” The idea holds that interested parties from within the creative economy and beyond will submit original concepts designed to further progress in this area and that the members of Saturday Morning will determine which ones to promote via their platforms and partnerships.

“We will have ideas every quarter that we will bring to businesses and ask for sponsorships,” Cartwright said in laying out his plans for the group. “Airbnb is very interested, and [‎global marketing and brand building officer] Marc Pritchard of P&G called last week,” he added, stating that Pritchard expressed an interest in signing a petition that would commit P&G to helping Saturday Morning execute projects that may need funding.

“We are not an agency, and we are not competing with agencies,” Cartwright said, “[Because] we all have day jobs.”

Jenkins described Saturday Morning, which launched with the aforementioned letter and a website, as “an advocacy platform/program.” The group agreed that their project would initially operate on an earned media model in order to bring greater attention to the concepts and executions that it chooses to highlight.

“We’re not here to create something that will end up in Cannes,” said Smith, “though that’s not to say that there won’t be any ads.” He floated potential ideas on which Saturday Morning and its partners could collaborate, including legislation that would eliminate the controversial stop-and-frisk approach to law enforcement and a future in which robots perform traffic stops to reduce the likelihood of violent confrontations between police officers and members of the public.

“Many of us have relatives who are police officers … there would be chaos without them,” he added, suggesting that many officers who would like to participate in the ongoing conversation “feel like their voices aren’t being heard.”

Syracuse University has reached out to the group to discuss future collaborative projects. So has MAL for Good, the purpose-driven arm of Lee Clow’s TBWA\Media Arts Lab, or Apple’s dedicated ad agency.

“In summary, we will be releasing these ‘Peace Briefs’ and looking to engage individuals, businesses and universities to create a wealth of content,” said Taylor-Hayford. “Ultimately distribution is key … at some point this will require paid media to engage [with the public] through the brand coalitions we will form.”

The group plans to release its first such quarterly brief in early 2017.