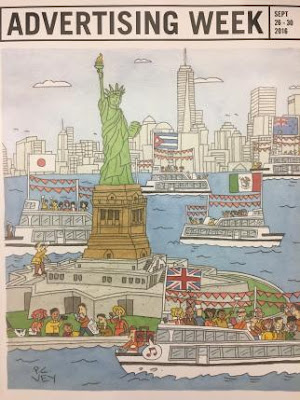 “There’s a perspective that it’s now OK to speak up and have a voice,” claimed 4As President-CEO Nancy Hill. “And I think the other side is recognizing that there’s a need to allow that voice and celebrate it.” To be clear, Hill is only referencing diverted diversity, with an emphasis on the White women bandwagon. For true minorities such as Blacks and Latinos, it’s not “OK to speak up and have a voice”—unless you’re prepared to be blacklisted, blackballed and blacked out of the business.

What a difference a decade makes.

Advertising Week 2016 in New York has no single theme, according to Matt Scheckner, the event’s executive director, but the fact that more than a dozen panels are focused on gender, diversity and inclusion is very much deliberate.

This week’s content, he said, is meant to “mirror what are the most timely and topical” issues in the industry and in the world. And this year, the dialogue around gender and race equality, though far from new in the country and in the ad industry, has been reignited by a number of controversial events, whether it be police-related shootings or lawsuits over alleged discrimination.

This summer, Advertising Week partnered with Future Foundation to conduct a gender diversity study of the industry. The survey, which includes responses from 285 executives across the media, marketing and creative industries in the U.S.—73% of whom are female—revealed that 40% of women claim to have encountered gender discrimination in the workplace. The survey also found more than one out of three women (36%) claim to have experienced sexual harassment at work. Advertising Week and Future Foundation will release the full survey on Sept. 28.

Advertising Week is just one of several groups showcasing research around gender and diversity throughout the week’s festivities. Nonprofit Advertising Women of New York is unveiling a new brand identity, She Runs It, along with a study orchestrated by EY and LinkedIn aimed at helping advance women leadership in marketing and media. The 3% Conference will talk about the results from its Elephant on Madison Avenue study during a panel, and the 4A’s will release findings from its study about how diverse professionals are treated in the workplace and how consumers perceive diversity in ads during its Talent@2030 Conference. The 4A’s will also debut research on how consumers perceive women in ads during a panel featuring Madonna Badger, founder and chief creative officer at Badger & Winters, who launched the #WomenNotObjects initiative in January.

4A’s President-CEO Nancy Hill said gender and diversity are definitely prominent topics for this year’s Advertising Week, which is expected to have more than 100,000 participants, up from 95,000 in 2015. The four-day fest also saw a 64% increase in early registration for Advertising Week delegates and special events this year, compared with 2015.

“There’s a perspective that it’s now OK to speak up and have a voice, and I think the other side is recognizing that there’s a need to allow that voice and celebrate it,” said Ms. Hill, who challenged the industry and agency CEOs to take more action on diversity and gender issues following the discrimination lawsuit against WPP and J. Walter Thompson in March.

Despite the fact that Advertising Week is chock-full of gender and diversity talks, Mr. Scheckner doesn’t think any of the discussions or studies will be redundant or contradictory. “Everybody has a different take and that’s what makes it unique and adds richness to the whole thing,” he said.

Ms. Hill said the content really “runs the gamut,” with sessions ranging from gender and race to LGBT and transgender topics.

Each year, Advertising Week, which is entering its 13th year in New York City and 18th overall edition, has to make sure topics are fresh and relevant, said Mr. Scheckner, which is why this year’s event also has plenty of talks around virtual reality, programmatic advertising and the digitization of the industry.

As usual, you can expect a fair amount of self-promotion by participating agencies, vendors and others amid the panels and the parties. But the meatier sessions are likely to center on gender and diversity, which are beginning to shape the new-business world. Witness the “Free the Bid” initiative launched two weeks ago, which calls for all agencies to include at least one female director every time it triple-bids a production for a client. A couple weeks before that, General Mills told Ad Age that it’s requiring that agencies participating in its review be staffed with at least 50% women and 20% people of color within the creative department.

I've been following Advertising Week, and except for one solid panel with Aaron Walton where they really talked about the Columbusing of the ethnic markets, and how "Total Market" is like this thing that's suddenly been discovered (when POC knew it was here all along), all of the discussions have been about Gender Diversity and Diversity of Thought. POC issues are tacked on, if at all, like a hangnail at the end of the discussion.

The 3% Conference panel today shoved women of color, lesbians and non physically attractive women (I'm not making this up, I wish I were) into one lump category and addressed their concerns as if all were equal and had the same problems surviving or even entering into the agency world to start with.

Think about that. Women of color, lesbians and non physically attractive women are relegated to one question / slide / sliver of the overall diversity discussion. And gender diversity and Diversity of Thought are the only diversity topics given room for talk and room to breathe in Madison Avenue.