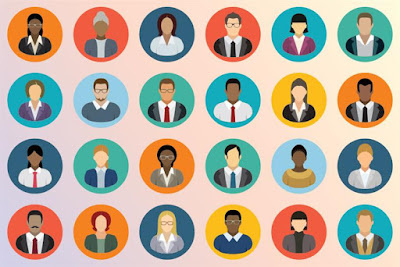 Campaign published a pathetic perspective from Grace Blue Joint CEO Claire Telling, who suggested the drive for diversity should be a slow ride. First of all, Grace Blue is a global executive search firm specializing in securing candidates for communications, media and creative industries at senior management levels, which totally explains Telling’s asinine opinion. That is, Grace Blue is directly responsible for perpetuating the worldwide exclusivity in the advertising and marketing fields. Additionally, Telling’s professional background features working for White advertising agencies including DMB&B, BBDO, BBH and TBWA\Chiat, so she’s completely familiar with maintaining the predominately Caucasian status quo.

Telling opened by cautioning companies to avoid rash responses with “Band-Aid” hires. It’s ironic that she’d use such a metaphor, when a true diversity champion—Harry Webber—created the iconic “I Am Stuck on Band-Aid” campaign. But it’s more outrageous that a self-proclaimed top recruiter would think companies might respond rashly via hiring initiatives that should have already been moving forward for many decades.

The prudent solution, according to Telling, is to create a 10-year plan for inclusion. Again, Telling seems oblivious to the fact that certain U.S. companies promised to address the dearth of diversity 10 years ago. Technically, White advertising agencies have been spewing false promises since the Mad Men era. Recommending a long-term plan underscores the long-term lies. Hell, Telling makes the Leo Burnett prediction that equality in adland won’t happen until 2079 feel downright prophetic—and actually optimistic.

Telling insisted there’s a “dearth of diverse talent at the senior levels”—however, she failed to accept accountability for the alleged deficit. As a veteran of White advertising agencies and a current executive recruiter, Telling is an active member of the exclusionary White majority. Of course, Telling is completely ignorant regarding the available diverse talent at the senior levels. Qualified candidates of color are ready for anyone open-minded enough to seek them out. Unfortunately, the talent remains invisible to idiots like Telling.

Telling revealed, “Many agencies come to Grace Blue asking for diverse talent to fill senior roles, but they’re often using diversity as code for ‘women’ and not necessarily for diversity across ethnicity and age.” Great. There’s another blatant admission that White advertising agencies and recruiters are conspiring to promote White women under the guise of fostering inclusion.

Telling called on the entire industry to demonstrate bravery and honesty in facing the challenges of progress. Hey, based on viewing the Grace Blue leadership, she ought to start the revolution in her own hallways. Too bad Telling and her culturally clueless cronies represent the cowardly dishonesty that has kept diversity a dream deferred, delegated, diverted and denied.

To tackle the diversity issue, plan 10 years ahead

The matter is urgent, but rushing to diversify will only backfire, says the CEO of Grace Blue

The conversations around the diversity problem in our industry are not only inescapable — they’re now undeniable.

And nothing highlights that better than the fallout from recent high-profile missteps at agencies, which included issues around gender, ethnicity, and age. The conversations are valuable; as we turn up the temperature on these discussions, they’ll hopefully spur more industry players to take a harder look at their own operations and diversity efforts.

But a potentially negative side effect to publicly confronting the issue may cause some leaders to address diversity with haste and lack of strategy, assuming that they can put a Band-Aid on the problem with one or two visible hires.

To make meaningful progress that’s not only smart for our businesses but also culturally significant, we have to start treating our efforts like a marathon. That means making both short and long-term decisions to put us in the best place we can be 10 years from now. There are several reasons for this, many of which I’ve encountered in my role consulting the industry on talent and its business impact.

Firstly, there’s a dearth of diverse talent at the senior level. And focusing attention only at the junior level ultimately won’t work.

Many agencies are making substantial efforts to drive diverse recruitment at the junior level, but retaining that talent is problematic. Diverse junior talent simply lacks the leaders to look up to, making it hard for them to see themselves in that place later on in their careers. Several agency CEOs have opened up to me about their well-intentioned efforts to attract a diverse audience of recent grads, but then many of those hires leave quickly for this reason. It’s frustrating for all concerned.

Continuing to recruit heavily at the junior level is important, but agencies must give even more immediate attention to hiring at a senior level.

Studies prove a diverse work culture helps generate dynamic ideas that drive growth — and part of that idea generation comes from diverse leaders at the top fostering the next generation of fresh thinkers.

We know it can be difficult to find diverse senior people. If this is the case, and you feel the need to look outside our industry, there are other sectors to consider. In particular, look at ex-military; their leadership, teamwork and problem-solving skills have been finely-tuned; Or, look at leaders who come from the client-side or management consultants.

Championing bravery is important — and we have work to do on that front. That’s part of the reason why there isn’t enough diverse talent at the senior level yet. Many agencies come to Grace Blue asking for diverse talent to fill senior roles, but they’re often using diversity as code for “women” and not necessarily for diversity across ethnicity and age.

This is not because agency leadership is shortsighted; rather, it’s indicative of widespread discomfort in talking about complex issues of race, sexual orientation, gender and age discrimination, to name a few.

We have to acknowledge where we’re falling short. We have to own what we lack. And the onus shouldn’t be on the Chief Diversity Officers — everyone from the CCO to the Head of Accounts should be leading frank discussions across departments. These leaders must open up about their own internal struggles; if they’re putting initiatives in place to combat the problem, they should share the success stories. And if they’ve hired capable, diverse candidates only to see them leave after a short time, they need to understand why. Only then will we begin to see more organizations take off the kid gloves and have honest conversations.

We need to create a culture of sharing. Much is written about creating an agency culture that is founded on inclusion, not exclusion. But how can we build that culture if we don’t understand the talent that’s living in it?

This is not a movement that starts just at the top, it has to happen at all peer levels. Even if it exposes certain biases, leaders need to create an open forum that fosters conversation on all sides that is personal and real.

The goal is to make honesty the norm — whether it’s opening up about small day-to-day challenges, or talking about specific instances of discrimination. Or simply encourage people to challenge management and ask for more responsibilities and promotions.

We have to stop treating diversity like a problem. Instead, it’s one of the biggest opportunities in our industry. It will make agency cultures and our product better and more representative of the world in which we’re living.

My recommendation? Develop a brave, long-term strategy that addresses diversity in all of its forms, and make all your leaders responsible starting now. Progress might happen faster than you think.

In my humble opinion, white female recruiters are the direct cause of a lot of the diversity problems in US advertising.

I don't know a single colleague in ethnic agencies in America who hasn't had their work or submission filtered out by one of these ladies.

The common refrains you hear are, "Don't you have any more, you know, General Market work?" or "Do you have work that's more, um, 'mainstream'?"

Our books, our body of work, are simply not considered as valuable as mainstream submissions. Asian, black and brown talent in front of the camera or, god forbid, anything in a foreign language or for a quote/unquote "urban" market never make it past these white female arbiters of taste, so no one can get near hot jobs.

They scoop up the leads and submission pathways to nearly all of the well paying jobs in the industry, block the pipeline, then (like the woman in this article) tell everyone there's a talent pipeline problem without realizing they themselves are causing the blockage.