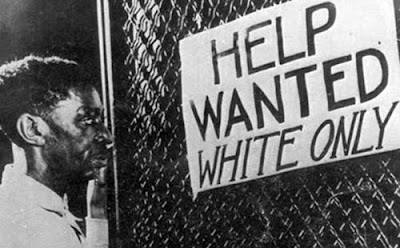 Advertising Age reported on a CareerBuilder study showing employment for marketing managers and market research analysts is on the rise, which means White people will continue to enjoy exclusive work privileges in adland. CareerBuilder identified technology and globalization as causing the boost in marketing jobs, and it’s a safe bet that nepotism and cronyism will accelerate the dearth of diversity. The Ad Age story featured a headline that declared, “Happy Labor Day! You’re In High Demand.” There should have been a qualifying subhead that read, “Unless You’re Not White.” Happy Labor Day indeed.

There’s good news for marketers heading into Labor Day: They’re in demand and even on trend, according to CareerBuilder in its annual study.

An analysis by the job-search site finds marketing managers and market research analysts among the jobs employers are advertising and filling the most.

What’s driving the growth? CareerBuilder credits technology and globalization for the rise in marketing employment—which are two things many in the industry view as creating job losses broadly.

The data is collected and interpreted by CareerBuilder’s labor-market analysis firm Emsi based on data from 100 national and local employment resources, not just CareerBuilder’s online job posts.

Marketing managers are among the biggest beneficiaries of technology advancement, according to CareerBuilder, with their ranks having swelled by around 10% or 19,000 jobs to nearly 209,000 from 2012 to 2016.

According to CareerBuilder: “Technology has made advertising become more intuitive and effective based on ability to track and interpret online behavior.” It’s a statement that, while seemingly positive and innocuous, may come as a shock to an industry involved in nearly constant soul searching and hand wringing about how technology is disrupting its future.

Meanwhile, market-research analysts are benefiting from the globalization trend, according to CareerBuilder. Their ranks swelled even faster, up 15% or by nearly 68,000 jobs to 532,000 from 2012 to 2016. The firm attributes that to companies “looking to gain a greater understanding of the international market they’re targeting.”

Some of them may also be studying whether technology really has made advertising more intuitive and effective, or even why marketers are so worried even though their ranks are growing at a healthy clip.

While growth in the marketing fields was good, it wasn’t the best. Among job categories growing faster were software developers (up 17%) and wind turbine technicians (up 37%). Somebody’s got to create all the software the marketers use and keep the power on to run it.