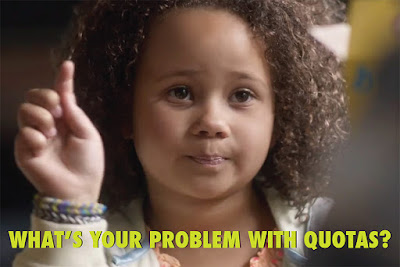 AgencySpy posted on the General Mills account review—which features diversity requirements for the competing White advertising agencies—with a headline reading, “General Mills Insists That Its Future Agencies Meet Specific Diversity Quotas.” The tone of the headline and the integration of the term “quotas” was enough to inspire over 75 comments to date. It’s a collection of cultural cluelessness, vividly exposing the ignorance killing inclusion.

Given the drive for diversity that has accelerated over the past decade, White advertising agencies should be capable of meeting General Mills’ mandates—and the agencies should be fully aware of the makeup of their staffs. Indeed, the holding companies are keeping records, although there is a continued refusal to publicly disclose the data. Most White advertising agencies have even made open commitments to diversity and inclusion. The figures sought by the cereal maker do not exceed the goals of the average White shop. So what’s the problem with General Mills’ request?

General Mills isn’t the only client to ask to see the diversity of its advertising agencies. Multicultural shops are routinely scrutinized like this. Clients judge these crumb-collecting companies by their “authenticity”—which is a polite way to say the staffs at such agencies are expected to be majority minority. Plus, minority ownership is an important expectation of the scheme. These shops are typically required to show their diversity supplier figures too, and are often mandated to use minority vendors. And of course, the work produced by multicultural shops must be blatantly targeted, often to the point of being stereotypical.

In short, it’s about time clients scrutinized the diversity of all its partners. And it’s well beyond time for White advertising agencies to deliver on diversity. Why would anyone want to team up with a company that doesn’t keep its promises?

What's killing me over there is the number of people in the industry who truly seem to believe that newly hired, newly arrived CDs from pick-your-country-of-origin are "minorities" in precisely the same way as someone who is African American, Asian American, Hispanic American or Native American. Like they were entirely interchangeable.

Especially now that every agency seems to be snatching up their requisite white female creative and Brazilian creative, I'm pretty certain that American minorities are going to get passed over completely, and that discussion shelved.

I've heard it mentioned here before, it's mentioned above, and mentioned in those comments... I wonder what's the deal with Brazil/ians?

I spoke to a senior ad guy and native Brazilian (worldwide experienced) a few years ago about what kind of chances I'd have working as a black American expat in Brazil... in advertising. More or less he told me it's not much different than getting hired here [/side-eye], but that I needed to be fluid in Portuguese. What I'm learning now, and maybe one of you could expound upon is that they're coming from a privileged position among South Americans.

BTW, he wasn't black, but IDK if he was light enough to be white.

And I get how crazy the discrimination is in Brazil, but he was open to dialogue so I asked anyway.

It’s a complicated issue but here’s some background to understand it.

First, in a country that’s noticeably dark, mixed race and/or black, the media is very white. Over 90% of all advertising in Brazil features white talent only.

When black men and women are in the ads, it’s not usually positive portrayals:

Then, how Brazilians define themselves in terms of color is complicated. What Americans would call black mixed-race could be referred to as white in Brazil. It has a lot to do with skin tone and class. More on that here:

To answer how a black American professional would be treated in Brazil? Honestly, you’d be rare. And probably often mistaken for The Help:

And the final question, why are 100% of the Brazilians that are being hired in the United States white (at least by Brazilian standards), not black? Because ad agencies in Brazil (like America) prefer to surround themselves with people they’re most comfortable with. If you are middle class, upper class, white, there are more doors open to you.

If you’re black, you may get in, but you face an industry where 90% of the advertising you create favors blue eyed blonde talent.

There’s no interest in or appreciation for dark-skinned anything, and the people responsible for that mindset and white-talent-preferred advertising are precisely the ones that American ad agencies are falling all over themselves to hire.

Thanks for the thorough response. I read all the articles and the parallels are strong between here and there. Even the guy I spoke to tried to explain away the few grievances I aired to him about advertising here in the US. (ie. the best book wins)

So it seems that Brazilians are preferred because they have a convenient mash-up of naivete and doublethink when it comes to race, but they're well versed in classism. I've met them in my city (at seasonal events), but haven't had any real deep conversations. I'm not gonna hold my breath about getting hired there as I hear most young expats make internet money.

I watch Brazilian shows online (as well as other Latin TV) and it really is unnerving to see so few black people if any in Brazil especially when I know better. I've even seen some black face on Brazilian shows. I have a mixed family and I could relate to the long read (colour bind) so it's something to think about. I'm black (among negligible other things), but high yellow nonetheless and not sure how I'd be perceived down there. I hear South Africans don't play that, I'd be white.

Most interesting is that Brazil's GDP could be 2% higher if it had any interest in getting black people into the workforce. I feel the exact same way about America. I think they're just decades behind in commodifying their black people as well as America does.