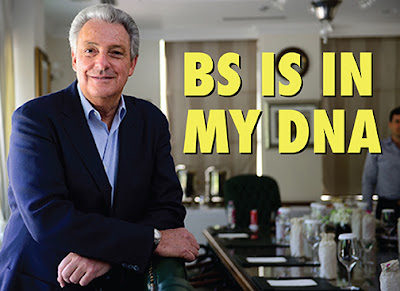 BI: One of the other big over-arching advertising topics that has certainly had a few high-profile cases this year has been diversity in the industry.

IPG has been no exception with what happened at Campbell Ewald (IPG fired the agency’s CEO and a staffer who sent a racist email to colleagues inviting them to take part in a “Ghetto Day”) the ongoing JWT discrimination suit (in which the agency’s now former CEO is accused of making racist and sexist slurs — allegations he denies.) What are holding groups like yourselves doing to ensure there are less of these cases happening?

It’s now to a point where our agency heads are held accountable for improvements on diversity and inclusion. When I mean accountable, I mean it affects their bonuses. And we have in fact enforced that to a point where, since we embarked on this program, we have had an improvement of over 50% of manager-level people representative of inclusion and diversity goals over the past 10 years. There is more work to come but I think we’ve made it our DNA.

The other part of it is that we have a zero-tolerance for it. As reflected in the Campbell Ewald [incident.] The second I heard about this, we took action. Not only with respect to the individual who wrote that email, which was offensive, but the individual who was responsible for him, and I took action on them. There was no hesitancy on my part, as opposed to some others.

And, frankly, I was very proud of the fact that I received both internally and externally a lot of comments appreciating how swiftly we acted in that case and our people were very much appreciative of it because they knew it was part of our core.

BI: What is it about the advertising industry that is different to other sectors when it comes to diversity issues?

MR: When I challenge individuals they say there are not enough candidates that are interested in the field, and so on.

Intuitively, that does not make sense. I don’t accept that as an answer when we go over this. We have to do a better job of reaching out and, in essence, selling the career path that we offer. It’s a great career path.

We are in the marketing and communication business. How can we not represent the consumer?

And, by the way, on the gender side, 80% of all purchasing decisions are made by females. So if we don’t have a fair representation just on the female side, we are missing the boat.

But as far as people of color … the same is true. Hispanic is one of the largest growing populations in the world. How can we not be representative of that in terms of the talent? And our clients are demanding this.

So Roth believes a decade of smokescreens has resulted in diversity and inclusion becoming a part of the IPG DNA? Okay, let’s review the progressive proof:

• IPG behemoth Draftfcb—now FCB—vowed to eliminate the term “diversity and inclusion” from the corporate lexicon by 2014. Now the words are a “core part the DNA at IPG.” Sorry, but IPG is rotten to the core.

• Deutsch, an IPG White advertising agency, dumped its Diversity Director, who claimed she was told the shop “was no longer going to invest in diversity.”

• IPG brags about dubious diversity awards and its fuzzy commitment and experience with progress.

It's 2016. The trend is to say you're diverse, and no one (not the press, not the trades, not shareholders) blinks an eye. They take you at your vague word and the only people to suffer or ask questions are the handful of American POC spread too thin to do anything about it.

"Hispanic is one of the largest growing populations in the world. How can we not be representative of that in terms of the talent? "

We'll jump straight over any Latin@s in the United States, and hire high ranking creative executives in every country in Latin America and Spain instead. We'll hire a bunch from Brazil too, even though they aren't Hispanic (we here at IPG don't realize that, and don't really care).

Once we have them nice and trained, we'll send them BACK to Latin America and Spain, and close down most of the Hispanic agencies in the US. When our American brand clients want to target Hispanic consumers, we'll do so from agencies based abroad.

That way, we don't have to deal any of those pesky minority Latin@s and can make sure the elite keeps power like they always have, and we continue to line our pockets with money made off the backs of "Hispanics" in America we'd never stoop to hire.