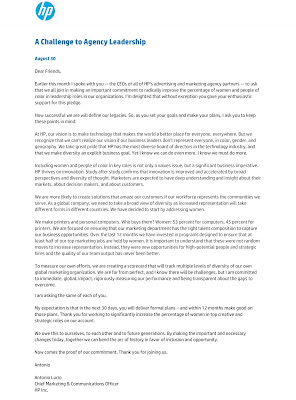 Adweek reported HP Chief Marketing and Communications Officer Antonio Lucio is demanding that his White advertising agencies embrace diverted diversity within a year—with proposals for action plans due within 30 days. “We are more likely to create solutions that amaze our customers if our workforce represents the communities we serve,” wrote Lucio. “As a global company, we need to take a broad view of diversity, as increased representation will take different forms in different countries. We have decided to start by addressing women.” Huh? When Lucio declared the need to take a broad view of diversity, he really meant broad. People of color can continue to wait in line behind White women at Madison Avenue—and at HP too, based on peeking at the Executive Team. Hell, even the only Nigro in the group is a White man. The HP tagline reads, “Keep reinventing.” Sorry, but Lucio isn’t reinventing anything; rather, he’s repeating, regurgitating and recycling everything that ultimately represses true diversity.

BBDO, Gyro and others have 30 days to submit proposals

HP chief marketing and communications officer Antonio Lucio has called on all of its agencies to put forward a proposal outlining how each agency will improve on the number of women and people of color within their creative departments.

In the letter, dated Aug. 30, Lucio notes that he has already spoken with each of HP’s agency partners and briefed them on what’s to come. Within the next 30 days, each agency must submit a formal plan outlining how it will improve diversity numbers. The expectation is that within 12 months each agency will have accomplished the goals put forth in those plans.

“Including women and people of color in key roles is not only a values issue, but a significant business imperative,” Lucio writes.

“We are more likely to create solutions that amaze our customers if our workforce represents the communities we serve. As a global company, we need to take a broad view of diversity, as increased representation will take different forms in different countries. We have decided to start by addressing women,” he added.

HP will also be participating in this larger effort to add more women and people of color to its staff by creating scorecards that will help the brand measure its own diversity numbers throughout the organization. “We are far from perfect, and I know there will be challenges, but I am committed to immediate, global, impact, rigorously measuring our performance and being transparent about the gaps to overcome. I am asking the same of each of you,” Lucio said.

The move from HP comes just a few days after General Mills chief marketing officer Ann Simonds announced that any agency working with a General Mills brands must prove that their creative department is comprised of at least 50 percent women and 20 percent people of color.

Unlike General Mills, HP did not disclose any particular percentage that it is hoping for within its advertising partners. Rather, the letter is a call to action for each agency to make a change, and actually begin to make that change rather than simply talking about it.

“We owe this to ourselves, to each other and to future generations. By making the important and necessary changes today, together we can bend the arc of history in favor of inclusion and opportunity. Now comes the proof of our commitment,” he added.

HP currently works with agencies including BBDO, FleishmanHillard, Gyro, Fred & Farid and Porter Novelli. BBDO worldwide president and CEO Andrew Robertson expressed his commitment to the idea saying, “the pursuit of gender equality is something Antonio and I have discussed a lot over the years, and not just because of business. I have two daughters and he has five. He knows about BBDO’s commitment to double the number of female senior creative leaders we have in one year and obviously supports it. His initiative to formalize an action plan on his business is something we welcome.”

Take a look at the full call to action [above].

They're going to fix the (white) woman problem first?

Wouldn't it have just been easier to say, "Men of color to the back of the bus, wait your turn?"

Thanks, HP and Antonio Lucio, for making sure everyone knows their place and where clients' priorities are.

That some stellar commitment to diversity right there.


Ad Age: How are you working toward more internal diversity with people of color?

Mr. Lucio: The single biggest opportunity around the world is female, so we decided to focus on that first. Within the U.S. and some countries we need to increase our representation of people of color and that will be our next phase.

Seriously? SERIOUSLY? Is this man so blind to the way people of color have been shut out in American ad agencies that he’s ignoring the obvious? And throwing a global smokescreen over the top?

Walk into any large American ad agency. There are ALWAYS WOMEN PRESENT. They may not be in the upper levels to the liking of the 3 Percent Crowd BUT THERE ARE WOMEN PRESENT.

Now do the same thing and try and count the number of black or brown staff, NOT ON FOREIGN VISAS, NOT INTERNS, that aren’t holding brooms or security badges. You’ll end up with between “zero” and “less than zero” in most cases.

But the white women must be helped first, of course. Because as Mr. Blind here says, there “might” be a wee small problem with the number of people of color in the U.S., but it’s obviously not as urgent as making sure white women hit 50%/50% equity before attention is turned to those issues.

And because he’s painting this as a global issue, now we’ll get holding companies saying, “Our Indian ad agencies are nearly entirely Indian! See how diverse we are?! Multicultural goal achieved!”