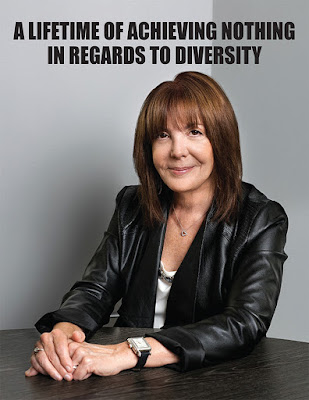 I would like to see more and more women in leadership positions. After all, we are seeing more and more that our clients are women. We need to reflect that as well. I love the idea of having more diversity, not just in gender but also obviously in race and every other form. My experience is the more diverse you are, the more creative you are because people come to it from different points of view.

Of course, now that Kaplan Thaler is out of the business, she’s eager to pontificate on embracing “the idea of having more diversity” that she failed to promote during her lifetime of achievement in the field. It’s so much easier to simply jump on the White women bandwagon of diverted diversity. For a clear picture of Kaplan Thaler’s idea of diversity, take a peek at the current leadership of her former White advertising agency.

You’re being honored with a Clio Lifetime Achievement Award this year. Do you remember winning your first Clio?

I don’t remember the first Clio I won, but I do remember the year I won four. One, I wrote the music and lyrics for “Kodak America,” then French’s mustard won two. I won for best comedy writing and then we won for a Burger King commercial. I was fairly young at the time and hadn’t been in the ad business very long, so I was really thrilled. It was incredible.

After stepping down as chairman of Publicis Kaplan Thaler early this year, what have you been working on?

I had been doing public speaking for several years off and on, but I decided to leave advertising this past February and be a speaker full time across the country, talking about a variety of topics. I love it because it’s a combination of me being able to give stories and insights and empowerment to people as well as my theatrical desires because I never quite gave up wanting to perform. That’s what I did in my 20s. I got to combine the two things and I love it.

What does your latest book, Grit to Great, tackle?

Robin Koval and I started The Kaplan Thaler Group about 20 years ago, and we are very proud of what we have accomplished. Along the way we decided to write books. Most recently we started looking at our success and realizing that neither of us are geniuses or incredibly talented, and we started researching really uber-successful people. We realized that success had nothing to do with the “it factor,” being brilliant or talented; it had more to do with what we called the “grit factor”—guts, resilience, initiative, tenacity—so we wrote this book Grit to Great.

As a woman who has achieved so much in this business, what do you make of all the conversations about the lack of diversity and sexism within the industry?

I would like to see more and more women in leadership positions. After all, we are seeing more and more that our clients are women. We need to reflect that as well. I love the idea of having more diversity, not just in gender but also obviously in race and every other form. My experience is the more diverse you are, the more creative you are because people come to it from different points of view.

What’s a highlight from your career that you’re most proud of?

One campaign that I am so proud that I have worked on with the team at Publicis Kaplan Thaler is something we did for the Anti-Defamation League called “ADL Imagine.” It was trying to get people to understand for the ADL centennial that they are more than just fighting anti-Semitism. They fight all types of hatred, bigotry and prejudice. They asked us to do a video to celebrate what the ADL had been fighting for. We started to think of all the lives that had been cut short because of a hate crime—Martin Luther King Jr., Anne Frank—we thought that would be a depressing film to show how young they were when they died, but what if we show a video of what they would have done had they lived. What would the newspaper lines read? We went to Yoko Ono and she was so moved by the idea that she gave us John Lennon’s Imagine song for free. It went viral in every country around the world. That’s one of the things I’m most proud of because it celebrates diversity of all kinds.

My personal experience with her agency?

If you were a white woman, or a foreign white male or female, or an elite foreigner of color who came from a family with buckets of diamonds and cash, you were going to fit right in.

Everyone else, have a spot at the Security desk or on overnight janitorial service.

The woman had all the time in the world to do something about diversity when she was in her heyday and did N O T H I N G.

for minorities of color.