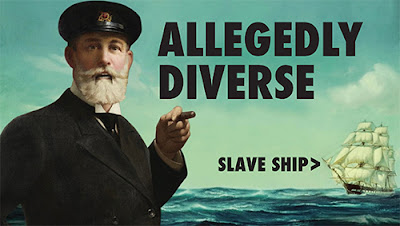 Advertising Age reported on the court case involving allegedly former JWT Worldwide Chairman and CEO Gustavo Martinez and allegedly former JWT Communications Chief Erin Johnson—allegedly former because Martinez is currently handling WPP projects and Johnson is being asked by JWT to return to work. The 3% Conference and Cindy Gallop are allegedly thrilled, as it gives them fodder to appear relevant. Plus, the scenario allows Sir Martin Sorrell and Maurice Lévy—who are allegedly concerned about diverted diversity—to continue squabbling like, well, little girls. And everyone can keep celebrating the advertising industry’s alleged progress with eliminating exclusivity.

The lawsuit filed by former JWT communications chief Erin Johnson against the agency and its former Chairman-CEO Gustavo Martinez is grinding on. In a court hearing today, Judge Paul Oetken approved a move by Ms. Johnson’s attorneys to add Title VII discrimination and retaliation claims to the suit, filed in New York in March over alleged racist and sexist comments by Mr. Martinez.

Ms. Johnson’s law team from Vladeck, Raskin & Clark filed a letter to Judge Oetken on Aug. 25, requesting a conference “to discuss defendants’ refusal to stipulate to plaintiff’s filing a Second Amended Complaint…” according to the document.

The defendants’ lawyers accused Ms. Johnson of trying “to avoid the scrutiny of the EEOC (U.S. Equal Employment Opportunity Commission)” with the Second Amended Complaint for Title VII, the document states. One of Ms. Johnson’s lawyers, Anne Vladeck, said on Friday that going through the EEOC could take years and the team wanted to go to court “as soon as possible” due to the alleged sex, rape and anti-semitic comments the plaintiff was facing.

During the procedural hearing at Thurgood Marshall United States Courthouse in New York City, the defendants’ legal team said it’s “demonstratively untrue” that Ms. Johnson has still been harassed because she asked to go on leave 10 days before the lawsuit was filed. The lawyers added that Ms. Johnson remains on company payroll and JWT has requested for her to come back, but she has refused.

Ms. Johnson’s legal team told Ad Age that JWT has “totally not” asked for her to return to work. Ms. Johnson and Mr. Gustavo were not in the courtroom on Friday morning.

Upon allowing the Second Amended Complaint, Judge Oetken is giving the defense two weeks to write a 10-page response, followed by two weeks for the plaintiffs to pen a response. After that, the defense will have one additional week to make another response to the decision.

In the amended complaint, filed Aug. 30, the section under “Gender Discrimination: Title VII” states that “corporate defendants discriminated against plaintiff in terms and conditions on the basis of her gender, including inter alia, by creating a hostile work environment because of her gender, in violation of Title VII.”

It adds that the defendants “acted with malice and reckless indifference to plaintiff’s rights under Title VI,” and due to the alleged discrimination, the plaintiff “has suffered and will continue to suffer irreparable injury, emotional distress, and other compensable damages unless and until this Court grants relief.”

In June, Ms. Johnson’s lawyers opposed WPP and JWT’s motion to dismiss the lawsuit. The motion to dismiss, filed May 20, said: “It is clear that Plaintiff has twisted the facts and distorted the context to contrive gender-based hostile work environment and retaliation claims.”

Ms. Johnson’s legal team’s June filing stated in response: “Although defendants, and their counsel, are fully familiar with the law governing motions to dismiss, they urge the Court to make factual findings—such as jokes about rape, and comments about African-Americans being ‘strange characters’ with a penchant to steal and act inappropriately, are not ‘offensive’ as a matter of law.”

This is the ad.