14603: Revisionist History From Ancestry.com And Anomaly. 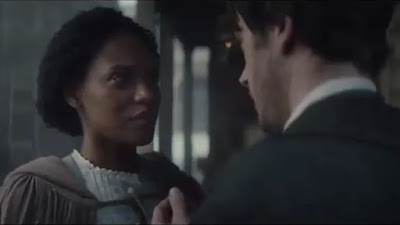 Adweek reported on a culturally clueless commercial for Ancestry.com from Anomaly that romanticizes why Blacks have White blood ties, ignoring the historical truths involving slavery and rape. Hey, it’s not the first time Ancestry.com has embraced revisionist history in its advertising. And Anomaly’s ignorance is, well, not an anomaly.

The spot doesn’t take enslavement and rape into account

It’s just another day in advertising and another example of a tone-deaf ad that likely would have never been approved had there been more people of color with significant sway on the matter.

Ancestry.com has pulled an ad that romanticized the reason why so many black Americans have white ancestry. (The biggest reason is rape.)

The ad, which is called “Inseparable” and is from Anomaly, is set in the 1800s and imagines a white gentleman trying to convince a black woman he is supposedly in love with to run away with him to Canada (as if white men in America at the time weren’t enslaving and raping black women and trying to dismantle the Underground Railroad that freed thousands of slaves).

The ad ran online this month and was broadcast on cable networks in Utah, where the online genealogy company is based, before The Salt Lake Tribune reported on it, prompting the brand to pull it from YouTube.

“Ancestry is committed to telling important stories from history,” an Ancestry.com spokeswoman said in a statement. “This ad was intended to represent one of those stories. We very much appreciate the feedback we have received and apologize for any offense that the ad may have caused. We are in the process of pulling the ad from television and have removed it from YouTube.”

The spokeswoman declined to say how many people of color were involved in making the ad, which was created by Anomaly’s Toronto office. The agency deferred comment to the client.

The ad garnered considerable backlash from viewers who pointed out how offensively unrealistic it is along with other insensitive aspects such as how the white male character interrupts the black woman when she tries to speak (arguably the only realistic part of the spot).

Others have noted how the ad parallels other white savior tales, from the recent controversial Academy Award-winning Green Book to To Kill a Mockingbird. Business Insider producer Manny Fidel explained the origin of white savior stories and detailed why they are so unrealistic and problematic in a video posted to his Twitter account in response to the Ancestry.com spot.

Here’s hoping change one day comes to the advertising industry.