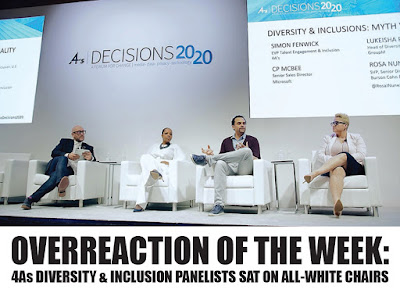 Adweek reported on “Diversity & Inclusion: Myth vs. Reality,” a navel-gazing 4As panel underscoring the reality that diversity and inclusion in adland is a myth.

The panel opened with 4As EVP Talent Engagement and Inclusion Simon Fenwick staging a stunt to highlight industry exclusivity. Fenwick asked all of the attendees to stand up, then instructed the White men and White women to sit down, which left few participants on their feet. Gee, what a brilliant demonstration. Of course, no one seemed to note the ridiculous reality of the exercise being conducted by a White man.

The subhead of the Adweek piece stated, “Executives agree that agencies need to do better.” Um, the 4As has been acknowledging such rhetoric for over a decade—and the organization has failed to inspire any progress on the subject since its founding in 1917. The panelists wound up regurgitating clichéd and contrived solutions, including treating the situation like a brief. Hey, the majority of advertising agencies aren’t even capable of drafting decent briefs for client projects.

The Adweek article closed by stating, “Too many have opinions on the topic without truly understanding it, Fenwick told the audience: ‘I think we need to sit in the room, we need to keep our mouths shut and we need to listen to the challenges and understand those challenges.’” By all means, Fenwick, shut the fuck up.

4A’s Panel: ‘Diversity of Thought Without Diverse Representation Is Not What We’re Trying to Achieve’

Executives agree that agencies need to do better

At the opening and close of the 4A’s “Diversity & Inclusion: Myth vs. Reality” panel yesterday, the audience provided evidence as to why such conversations are so important for the industry.

Moderator Simon Fenwick, 4A’s executive vice president, talent engagement and inclusion, opened with an exercise illustrating the lack of diversity in the industry. He asked the room to stand up, then asked the white men in the room, and then the white women in the room, to sit down. Few attendees were left standing.

The makeup of ad agencies “doesn’t really speak to what our clients look like or what our consumers look like,” he said, adding that the number of minorities at agencies “seem[s] to fall by about half when you start talking about leadership.”

“We do a great job bringing diverse talent into the industry, but once they try to advance through the organization, we lose them,” he added.

One idea the panel criticized was “diversity of thought.”

“We keep hearing that’s what’s really important at organizations today,” said Fenwick. But Lukeisha Paul, U.S. head of diversity, equity and inclusion at GroupM, called the phrase “a struggle” for her.

“Until we are of one accord, we don’t know what we’re trying to progress on and what measurements we can put into place,” she said, explaining that all of her conversations regarding diversity begin by asking others for their definitions of the term.

Diversity of representation, she also noted, increases diverse perspectives. She attributed recent missteps by unnamed companies that showcased insensitivities to race or gender but somehow survived client-side and focus-group review to the same lack of critical perspectives.

“Diversity of thought without diverse representation is not what we’re trying to achieve,” added Burson Cohn & Wolfe svp, senior director, diversity and inclusion Rosa Nunez, who views the phrase as “an excuse not to change the status quo.”

The panel also addressed the myth that the complexity of the issue makes it all but impossible to navigate.

“There’s definitely simple things that can be done to address and make an impact as it relates to diversity and inclusion,” said Microsoft senior sales director CP McBee. “Maybe the most difficult thing is sitting and listening without judgement,” he added, explaining that one can’t go into those conversations “expecting a fixed outcome.”

Paul disputed the idea that diversity is an insurmountable challenge, encouraging attendees to step back and compare it to developing a strategy for a client whose target audience is primarily people of color.

“That’s what we’ve been trained to do in this industry,” she said to a round of applause. “The client is yourself [and] your business, that’s your target audience. How do you reach your goals?”

Paul, who created the diversity and inclusion board at IPG’s UM, also established a distinction between “equity” and “inclusion,” defining the former term as “ensuring success for all people from where they start,” while contrasting “equity” with the idea of “equal opportunity” since not everyone starts out with equal advantages.

Only when the industry has honest conversations about promotions, raises, “who’s getting groomed to be on panel discussions,” and “who’s being accountable” can it truly make progress, she added.

Fenwick then asked attendees to consider the issues of commitment, culture and communication, before responding to questions submitted by anonymous audience members.

One cringe-worthy query asked why such panels didn’t include more white males.

After pointing out that he is, in fact, a white man, Fenwick said that it’s the responsibility of “the people in the room to actually be sitting in the room with the diverse populations.”

Too many have opinions on the topic without truly understanding it, Fenwick told the audience: “I think we need to sit in the room, we need to keep our mouths shut and we need to listen to the challenges and understand those challenges.”