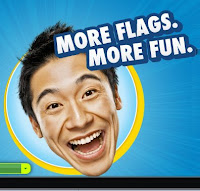 OK, MultiCultClassics was way late to call out the Six Flags Asian character. Hadji Williams commented on the guy back in April. Many others have already offered perspectives too. But Angry Asian Man posted a truly revealing story from an actor claiming to have auditioned for the commercial role. The person wrote:

Recently there has been a Six Flags commercial where they show an Asian man randomly speaking in a stereotypical Engrish accent. I, in fact, did go to the audition for that a few months ago. The casting call said nothing about speaking in a fobby accent. When I got there, the casting guy said stuff like, “Think about those Charlie Chan movies…talk like your grandfather.” My grandfather was born in the United States! I was so disgusted that I left midway.

Charlie Chan always seemed like a heroic figure in those old movies.
Funny that they never found a Chinese actor. (His sons were played by Chinese guys, though.)
Also funny that Mr. Moto was played by a German, Peter Lorre.
What is painful about the Chan pictures isn't the Chinese portrayals, but Mister Step 'n' Fetchit in the early ones; less painful was Mantan Moreland, but still painful today.

May be next time they try Jackie Chan.

Tip: Never pay full price on Six Flags tickets.... There are lots of Six Flags Coupon Codes at Mandrekar.com or buy from SixFlags.com