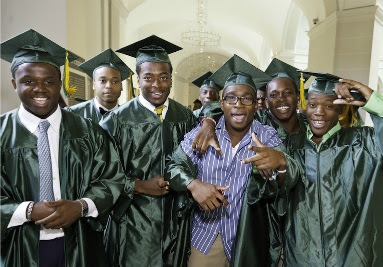 U.S. Politics Today reported the High School for Innovation in Advertising and Media (IAM) graduated its first senior class via a gala event held at the Brooklyn Museum. Guest speakers included IPG Chairman and CEO Michael Roth and 4A’s President-CEO Nancy Hill. Jetting from Cannes to Brooklyn in the past week must have been grueling for Roth. His commencement address was undoubtedly riveting, although the kids likely would have preferred listening to players and owners from the Brooklyn Nets. Hell, Roth’s highly paid underlings aren’t even interested in hearing the man ramble.

Congratulations to the IAM students, the school’s dedicated staff, and the program’s supporters. Seeing young citizens move forward is always a great thing.

MultiCultClassics has repeatedly stated its position on such endeavors throughout the years. So this will be brief.

Hill inspired the students by sharing she was once told, “‘Anything is possible. Everything is not.’ But if you focus on the anything—the one thing that you really believe in and that you really want—there is nothing, nothing, I assure you, that you can’t accomplish.”

The 4A’s honcho unwittingly revealed the true reasons behind the exclusivity on Madison Avenue. For over 60 years, diversity in our industry has been impossible. And it’s because leaders haven’t focused on anything, don’t really believe in it, and don’t really want it. That’s why nothing, nothing significant has yet been accomplished.

Hill and Roth shouldn’t just deliver speeches to minority youth. The executives must also present lectures to the industry’s majority oldsters, demanding that they create inclusive workplaces. Why simply put underserved kids through school? Send culturally clueless adpeople to diversity training too—and see how many can actually graduate. Don’t stop after handing out scholarships to deserving students for academic achievement. Follow up by delivering pink slips to unresponsive managers for professional failure.

Otherwise, you’ll only be teaching the IAM Class of 2012 their first lesson in Madison Avenue bullshit.

The High School for Innovation in Advertising and Media (IAM) graduated its very first class of seniors in commencement exercises held today at the Brooklyn Museum.

Interpublic Group chairman CEO Michael Roth delivered the commencement address to the graduates, saying, “Five years ago, when a bunch of us in the industry came up with the idea for IAM, we looked forward to this day, when we’d be seeing you—the first graduating class—completing your studies. What you’ve accomplished is impressive: 48 of you are graduating today, with 80 percent going on to college.”

He continued, “Just as impressive is what you’ve achieved in learning about the business. You have created campaigns for real clients, and presented them before leading industry professionals. This was the idea behind IAM—to prepare you for your future, to open your eyes to the possibilities.”

“American businesses are realizing that to remain competitive in a global marketplace, there’s value to be found in partnering with public schools to develop the next generation of the labor force,” said Nancy Hill, President-CEO of the 4A’s. “It’s particularly important for the advertising and marketing industry, which is suffering a talent drain to tech and financial firms. This school is now one of the wells we’ll draw from for talent for many years to come.”

Hill added that schools like IAM High School are able to re-engage students in their core academic subjects by showing them the practical use of the skills learned in the classroom. At IAM, students have the opportunity to take workshops in the creative aspects of advertising (copywriting, art direction), in understanding media planning and buying, and in web-site production and design.

Many of the graduates plan to pursue their education by attending 2- or 4-year post-secondary schools. Four graduating seniors—Tevin Jeffery, Meagan Francis, Darren Freeman and Jermaine Richards—received portions of a $60,000 scholarship from the Advertising Club of New York to continue their educations.

Besides the first graduating class, the school has 330 students from grades nine through 12, and some of its milestones thus far are as follows:

• On May 4, 2012, IAM High School opened a student-run full-service advertising agency on campus, and it is working on ad assignments from local Brooklyn businesses

• IAM has formed long-term partnerships with the 4A’s and its member agencies, such as, McCann-Erickson, Deutsch, DraftFCB, Digitas, Publicis, McGarryBowen and Euro RSCG

• Through these ad agencies, the IAM Advertising Agency is working with blue-chip marketers including Jaguar and Google

IAM is the first accredited high school in the country that has advertising and marketing as part of its core curriculum, and it is certified to award Career and Technical Education (CTE) diplomas. It is one of 35 CTE high schools in New York City.

The 4A’s Nancy Hill said that IAM High School is the model for what she hoped will be many other public high schools in cities around the country that will develop advertising-focused curricula to graduate students who are prepared for post-secondary education and the business world.