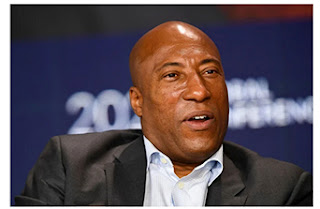 Advertising Age reported that Byron Allen continues his courtroom crusade to convince Caucasian corporations to contribute cash versus crumbs for Black-owned media. “My guess is that we’ll have to sue about another 20 or 30 corporations,” Allen predicted, “and then the market will correct itself.” Regarding his lawsuit against Mickey D’s, which is still working its way through federal courts, Allen steadfastly declared, “I don’t want to settle with McDonald’s. I want a judge and a jury to tell them without question your behavior is horrid and racist. I want the truth to come out.” Ba da ba ba booyah!

Byron Allen has made inroads getting big advertisers to spend more on Black-owned media—specifically his own. But he still doesn’t believe the industry is moving far or fast enough, and to get things going, said he may need to sue up to 30 more companies.

“My guess is that we’ll have to sue about another 20 or 30 corporations,” he said in an interview, “and then the market will correct itself.”

The record points to that being no empty threat. The former comedian and founder-CEO of Entertainment Studios, whose properties include The Weather Channel, Justice Central, Comedy TV and The Grio streaming and digital platform, is also known for his $10 billion 2021 discrimination lawsuit against McDonald’s Corp. He’s also sued measurement giant Nielsen twice over billing and performance disputes since 2020.

All three suits continue working their way through federal courts. Allen’s lawsuit against McDonald’s has had three amended complaints in federal court in addition to the original in California state court, so far surviving motions to dismiss and now in discovery. That’s a point where many litigants would consider settling. But Allen said he has no interest in that.

“I don’t want to settle with McDonald’s,” Allen said. “I want a judge and a jury to tell them without question your behavior is horrid and racist. I want the truth to come out. I want people to see how much money they spend” with Black-owned media, which he said is well below the 2.3% of its marketing and media budget the company has reported.

A McDonald’s spokeswoman said the company stands by its numbers, which it intends to increase to 5% of its budget by 2024. McDonald's is the 26th largest U.S. advertiser based on 2021 spending, according to the Ad Age Datacenter.

McDonald’s has said in court filings that its refusal to advertise with Allen’s properties had nothing to do with discrimination. Instead, a legal team headed by Loretta Lynch, former Obama administration attorney general, has said the decision had to do with low Nielsen ratings.

McDonald’s has used Allen Media Group’s own words in its lawsuits against Nielsen—in which Allen Media Group pointed out the crucial importance of Nielsen ratings to advertisers—to buttress that argument.

That spending represents progress, but not enough, Allen said. He points to the bankruptcy filing earlier this year of the Black News Channel as evidence.

Allen said the bankruptcy led to nearly 300 mostly Black journalists losing their jobs, and most of them not getting their last paychecks. Allen Media Group recently bought the Black News Channel via a bankruptcy court auction and has integrated it into its The Grio network.

Allen’s threats of litigation do get results, as Nielsen’s Chief Commercial Officer Peter Bradbury acknowledged in a declaration in Allen’s 2020 lawsuit against his company.

Rates that Allen’s company, then named CF Entertainment, paid under a 2007 contract were “very favorable compared to the pricing Nielsen typically would have offered to comparably-sized channels,” Bradbury said. “This does not surprise me, because in my experience Mr. Allen is a hardball negotiator who has obtained favorable amendments to the original agreement over the years through savviness and persistence. For example, as a way to increase his negotiating leverage, Mr. Allen has frequently threatened to launch public relations campaigns or lawsuits against Nielsen if Nielsen did not accede to his demands.”

In this case, though, Nielsen didn’t accede to Allen’s demands, which were that measurement for The Weather Channel that he acquired in 2018 should be priced similar to Allen’s smaller networks under terms of the 2007 contract and a 2017 amended deal.

The court rejected Allen’s motion for a preliminary injunction in that case, putting his company on the hook to pay Nielsen more to measure The Weather Channel than for all the rest of its properties combined.

That case remains alive, as does another Allen filed earlier this year seeking damages for breach of contract due to measurement problems Nielsen has acknowledged and the suspension of Nielsen's Media Rating Council accreditation. Nielsen has not yet filed an answer to that suit, which has moved to federal court from Illinois state court, as the two sides battle over where it should be heard.

Nielsen declined to comment on either lawsuit beyond what it has stated in court filings.

Byron Allen is doing the right thing. McDonald's is still trying to squirm out of spending real money with anyone other than their chosen white women vendors, who they classify as "minority," and moving the goal posts again.

You can see from their latest "diversity" report that they simply switched to redefining diversity as "global diversity" like all of their other corporate brethren have done lately so they can wiggle around BIPOC investment in the United States:

Then if you look closely, you'll see how they're continuing to weasel around significant expenditures: "As of the end of 2021, McDonald's USA and U.S. Franchisees increased investments in diverse-owned media and production houses and content creators to 7.7%"

McDonald's lumped media, production houses and content creators in together. Know how that plays out in the real world? Media companies owned on paper by white women take up almost the entire bulk of the spend. They also count white women from Europe who own companies that SERVICE McDonald's USA in there. Then a few relative pennies are spent on individual POC social media influencers who they call "content creators" and voila, they print it in a DEI report and claim success.