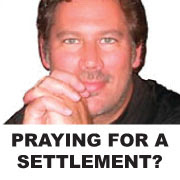 Not quite sure what to make of the newest developments in Steven Biegel vs. Dentsu. Now the fired creative director is clarifying his charges that focus on faith-based discrimination. It’ll be hard to gain sympathy arguing he was paid significantly less than a non-Jewish ECD, given that Biegel’s salary was still in the healthy six-figure range. Biegel should realize that one survey showed Black executives earning over $100,000 annually account for about 0.5 percent of the total workforce on Madison Avenue. Hey, it’s pretty clear our industry is rife with bias and bigotry. But Biegel’s alleged suffering places him in the minority among victims. Here’s the up-to-the-minute report from AdAge.com…

NEW YORK -- The focus of Steve Biegel’s courtroom battle against Japanese ad giant Dentsu is shifting from brothels and bathhouses to charges of faith-based discrimination.

The former Dentsu creative director now claims that not only were he and other Jewish colleagues the subject of faith-based discrimination during the three years Mr. Biegel worked at the agency, but that such bias persists within Dentsu’s ranks, particularly against Denstu America’s president, Doug Fidoten.

A Dentsu spokesman and Mr. Fidoten declined to comment.

Response to motion to dismiss
Mr. Biegel’s latest filing is in response to a motion to dismiss last month from Dentsu and two of its top executives, Denstu Holdings CEO Toyo Shigeta and Tim Andree, CEO of Dentsu America. In their court papers, Messrs. Shigeta and Andree fired back at Mr. Biegel’s salacious October lawsuit, saying that his tales about Prague brothels, Tokyo bathhouses and lewd commercial shoots featuring Canon spokeswoman Maria Sharapova were fabricated. They also refuted claims of retaliation against Mr. Biegel for making complaints about those situations.

Mr. Biegel’s lawsuit was simply a stunt he cooked up with his attorney, Andrew Dwyer, “to get [Dentsu] to pay him an exorbitant amount of money despite Biegel’s lawful termination,” the defendants said in their motion to dismiss.

In a Nov. 30 sworn statement attached to the filing, Mr. Biegel claims that evidence for Dentsu’s prejudice against Jews is rampant and that the agency’s reliance on its president, Mr. Fidoten, as proof it does not discriminate is “disingenuous.”

‘Token Jew’
“Defendants have openly discussed firing Mr. Fidoten, as well as removing his responsibilities,” Mr. Biegel said in the statement. “Mr. Fidoten is quite literally a token Jew, presented as a fig leaf to hide the simple fact that Mr. Andree and his fellow gentile managers have in one year eliminated every Jew in the creative department at Dentsu.”

“Even though he remains technically employed as Dentsu’s president, in reality, he has been stripped of his powers. … Mr. Fidoten himself has become aware of his precarious position, and has been talking to others in the industry about the possibility that he may lose his job,” Mr. Biegel said in the statement.

In his statement, Mr. Biegel further accuses Dentsu of having a religious bias that skewed salaries. The agency’s current top creative director Mike Wilson, who is not Jewish, is paid $450,000 per year, plus various benefits, “which is almost exactly equal to the combined salary [former Dentsu America Executive Creative Director Ronald J. Rosen] and I were paid at Dentsu,” Mr. Biegel said in the statement.

Meanwhile, in a letter attached to the filing sent earlier this year to Mr. Dwyer, lawyers from Davis & Gilbert on behalf of Dentsu deny religious bias on behalf of management, citing Mr. Shigeta’s hire of Mr. Biegel three years earlier -- knowing that he was Jewish -- as evidence.

Legitimate reason
Mr. Biegel’s termination had a legitimate business reason, the lawyers said: “Canon, a major Dentsu client, almost cancelled its campaign because it was completely unsatisfied with a commercial that Biegel was in charge of producing,” lawyers said.

Representatives for Canon could not be immediately reached.

Further, in a meeting with Mr. Andree, Mr. Biegel badmouthed Mr. Fidoten, calling him “useless,” according to the Dentsu letter, and stated that he should be promoted to co-creative director with Mr. Rosen to “do his job better.”

That letter also stated that Mr. Biegel was a problem employee, and that previous employers also had issues with his work performance and attitude.

Mr. Biegel “had been provided with a serious written warning about his unprofessional behavior while at his previous job with Ogilvy & Mather Worldwide,” the letter said. “This included making bad-faith requests for personal favors and acting vulgar and rude toward his co-workers, superiors and outside vendors, which resulted in five female staff members refusing to work with him.”

“We will not comment on employees, former or current,” an Ogilvy spokeswoman said.
Posted by HighJive at 10:01 PM