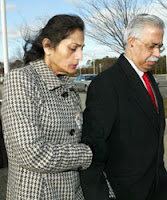 Making judgments in a MultiCultClassics Monologue…

• A jury convicted the Long Island millionaire couple that kept two Indonesian housekeepers as slaves. When the guilty verdict was announced, the wife and her daughter (who was also in the courtroom) both fainted. The husband and wife now face up to 40 years in prison. They’re probably wondering if they’ll be allowed to bring the slaves to keep their cells tidy.

• Foxy Brown appeared before a judge on Monday, maintaining a calm and collected demeanor. Her lawyer remarked, “[Foxy] told me, ‘Sometimes God has to humble you in order for you to realize who you actually are.’ … When you get away from the glitz and glamour, you can find inner peace within yourself.” Then Foxy probably beat the shit out of him with a cell phone.

• Folks are wondering what’s up with Michael Jackson’s face. Again. Jacko appeared at a Las Vegas bookstore sporting bandages (see photo below). The King of Pop’s spokesperson could not explain the bandages. At this point, can the spokesperson possibly explain anything about Jacko? 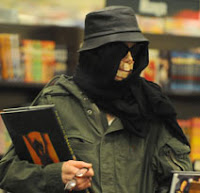 Foxy Brown just used her cell phone to beat the shit out of me--simply for reading that! It was humbling!