Didn’t want to finish the week without one more jab at General Motors.

While scanning past posts for the upcoming MultiCultClassics Year In Review, we stumbled upon Essay 2017.

Last April, shortly after the Don Imus fiasco, Adweek published a story stating certain corporations would definitely consider advertising with the shock jock if he returned to the airwaves.

The story’s spotlighted corporation? Why, GM, of course.

According to Adweek, “After GM initially pulled its ads last Wednesday, the automaker noted that because Imus had apologized and promised to make changes in his program, it was ‘monitoring’ the situation. Asked for clarification, company spokeswoman Ryndee Carney said, ‘I think that would indicate that we were open to revisiting at some point down the road’ returning to the broadcast. Carney said that if Imus does land somewhere else in radio land, and ‘if an opportunity is presented to us [to advertise], we would assess it just like we do all the other opportunities that come our way.’”

Carney, incidentally, is the GM spokeswoman extensively quoted in the recent alleged misreporting by sources including Black Enterprise.

In April, MultiCultClassics wrote a line that’s proven to be downright prophetic: “It’s clear that General Motors loves minorities—but only when doing so meets profit objectives.”

Which leads to the latest parody ad… 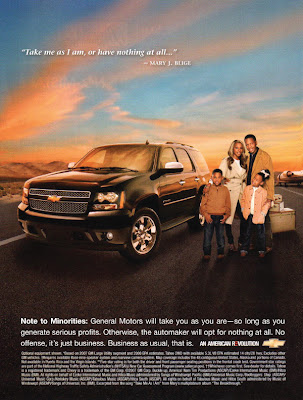