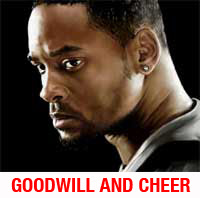 Goodwill and cheer in a MultiCultClassics Monologue…

• Will Smith sparked controversy by referring to Hitler during an interview. Smith was explaining his belief that everyone is basically good and said, “Even Hitler didn’t wake up going, ‘Let me do the most evil thing I can do today.’ … I think he woke up in the morning and using a twisted, backwards logic, he set out to do what he thought was ‘good.’ … Stuff like that just needs reprogramming.” The Jewish Defense League believes the actor labeled Hitler as “good,” and the group called for a boycott of Smith’s latest flick. Celebrity gossip Web sites also posted criticism for Smith. However, the actor was quick to angrily respond. “It is an awful and disgusting lie,” said Smith in a statement. “It speaks to the dangerous power of an ignorant person with a pen. I am incensed and infuriated to have to respond to such ludicrous misinterpretation. … Adolf Hitler was a vile, heinous vicious killer responsible for one of the greatest acts of evil committed on this planet.” Hitler is also known as a “comedy killer,” as Smith unfortunately discovered.

• Jay-Z announced he’ll step down from his role as president of Def Jam Records. “It’s time for me to take on new challenges,” said Jay-Z in a written statement. “I am pleased to have had the opportunity to build upon the Def Jam legacy, helping to move the company into a new era of artistic success.” Jay-Z is rumored to be plotting an advertising-related venture with Steve Stoute. Wish these guys could create ads as good as Jay-Z’s music.

• A new study shows parents may be in denial over their kids’ obesity issues. One expert speculated the study indicates parents falsely think kids will outgrow obesity. Or maybe the parents aren’t noticing the problem because they’re too busy stuffing their own faces. Pass the Christmas turkey and gravy!
Posted by HighJive at 4:18 PM