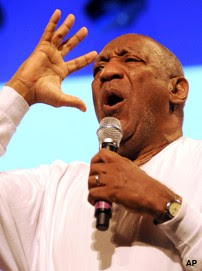 Death By Twitter: Cosby Proves Self Alive on CNN

Larry King Live may be the go-to destination for coverage of celebrity deaths, but last night, Bill Cosby called in to confirm that he is quite alive. This, in contradiction to the Trending Topics list on Twitter—the list of most-mentioned subjects on the social-networking service—which for much of the day was topped by the phrase “Bill Cosby Died.” While Cosby initially seemed to be taking the rumor in stride, he was clearly not entirely amused by the misinformation— as he indicated on Twitter itself. “It is no longer fun,” said the multiple victim of false-death rumors.

Cosby repeatedly addressed “the person” who spread the rumor online, though it’s not entirely clear to whom the rumor can be spread, or if it had a single source. The nature of Trending Topics, of course, is that by the time a subject tops it, it’s been tweeted about so often that it’s difficult to mine it for the first appearance of a particular hoax.

It’s a harmless enough story—in that no one actually died, anyway—but there’s a lesson in trusting Twitter as a news source. That lesson is not, “Don’t use Twitter as a news source,” though. I check my Twitter stream constantly for news and have first learned of a lot of breaking news stories from it over the last couple of years (some of those being, yes, celebrity deaths).

But it does show that on Twitter as everywhere else, it’s important to use sources you trust—a person, or news outlet you know to be reliable is a more bankable form of news than the aggregated Trending list, which indicates what people are tweeting about but doesn’t verify anything. (The latter, though, is a reliable reminder of when the Bachelorette is on.)

The CNN interview takes an odd turn toward the end, as guest host Kyra Phillips uses the moment to ask Cosby to envision his own death and how he’d like it treated. Cosby pivots and replies that, if there’s ever a movie made about him, he’d like to be played by Steven Wright, to which Phillips reacts with raucous laughter even though, evidently, she does not know who Wright is.

Elsewhere in the clip, Cosby offers his definition of Hell: a place where everybody’s laughing, but nothing is funny. That, I believe, describes the circle where they house the death-rumor spreaders.
Posted by HighJive at 11:33 AM