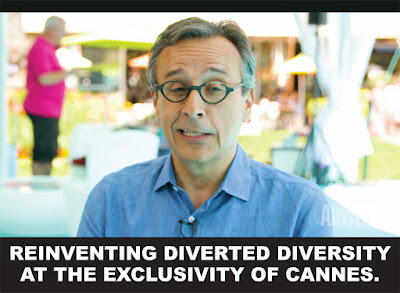 Adweek and Advertising Age spoke with HP CMO Antonio Lucio, who blathered on about diverted diversity from the exclusivity of Cannes. “If I could point at one thing that is getting in the way of real progress in our industry, it’s the lack of diversity,” declared Lucio. “We’re spending way too much time talking about it, not enough time doing what needs to be done.” Of course, Lucio is only doing the less-than-minimum of what needs to be done, as his progressive baby step involves promoting White women. Indeed, his comments to Ad Age were almost entirely gushing about rising female figures. Lucio revealed that his White advertising agencies will publicly share the actual success numbers in October, and he announced, “…We’re going to do a white paper on the good, the bad, the ugly and the extraordinary.” Yes, it’s so appropriate to call the report a White paper.

Company has balanced its leadership teams

“If I could point at one thing that is getting in the way of real progress in our industry, it’s the lack of diversity,” said Lucio during a video interview with Adweek. “We’re spending way too much time talking about it, not enough time doing what needs to be done.”

And Lucio isn’t just paying lip-service to an industry-wide issue that has been a popular topic at this year’s Cannes Lions festival. He’s actually doing something at HP. “Over the last year, we’ve undertaken a very important initiative … to balance our teams internally to the point that today 50 percent of our most senior leaders in communications and marketing are female,” said Lucio.

‘It’s Working’: HP Says Its Push for Diversity at Its Agencies Is Getting Results

Last September, HP Chief Marketing Officer Antonio Lucio sent a memo to HP’s five advertising and marketing agency partners asking for a commitment “to radically improve the percentage of women and people of color in leadership roles” in their organizations. In April, it released an ad promising to fight bias among its hiring managers. Now, almost a year into the diversity push, Lucio tells Ad Age that HP is already seeing real results—both internally and from HP agencies Gyro, BBDO, Fred & Farid, Edelman and Porter Novelli.

In a quick discussion at Cannes, Lucio reiterated his commitment to diversity and hinted at things to come.

Explain how it’s been going.

Better than I expected. Back in October we made an invitation to our agency partners to participate. We allowed them to set their own targets, understanding that they had to show meaningful improvement in the number of women working on our account, with specific emphasis on strategy and creative services.

Women and people of color.

And they were going to set those targets themselves?

That was the only way they were going to commit to it. I thought that was a very important point. I’ve been doing marketing for a very long time. It is stronger when I can convince you to set your own target because it is your target. You are committed to delivering it as opposed to me imposing it on you.

Were there any targets that weren’t good enough for you?

None at all. I was very encouraged by the level of enthusiasm. I met with CEOs only. They did put some very interesting stretch targets. And over the last two quarters, we met once over their scorecard.

By October we’re going to give you all of the numbers. What I can tell you right now is that in our lead agencies, the number of women leading the account has grown. The number of the women working in the creative department working on our account has grown where they were almost nonexistent. And in the media agency, the number of strategic resources leading our account, which in media is the most important role, has increased significantly as well. Our plan is that in October, by the one year anniversary of our call, we will sit down with all of the agencies and we’re going to do a white paper on the good, the bad, the ugly and the extraordinary.

The only hint that I can give is that it’s working.

We’ve heard from some agencies, off the record, who bristle at this sort of mandate. They say it’s unfair, that it’s a sort of reverse discrimination.

I will tell you one of the CEOs told me that if his 10 lead clients had done this, the industry would be transforming at a faster pace. What we’re requesting is not arbitrary.

Talk about the internal adjustments you made to your own team.

When you looked at my team—like many marketing departments—out of the total population, about 60 percent are women. When you take it a notch higher—to managers—that number goes from 66 to 53 percent. From there to the senior leadership team, the ten most senior people in my global team, there were only two. So over a 12 month period, we worked it out through movements—changes, logical evolution of the structure, if you will—to get to a balanced 50/50. We had to do that first because without the strength of the argument, I could not have gone to the agencies.

You have to walk the walk.

When do we start seeing this reflected in the work, then?

Out of the work we just released, for example, the mother-daughters film, that was a female creative director that was not involved in our account before we started this. On the more mainstream stuff, our biggest product introduction on the computer side, which is inking, the director came from Free the Bid and she directed five spots that are going to be seen globally [starting this week]. That had never happened before. So we’re going to see this more and more and more. We test everything, and the way those five spots on the premium line tested, was some of the highest scores we’ve seen.

His answer: 'Women and people of color.'

That kind of says it all doesn't it?

The head of HP marketing isn't thinking of people of color at all unless someone in the press prods him, and then only as a brief afterthought.