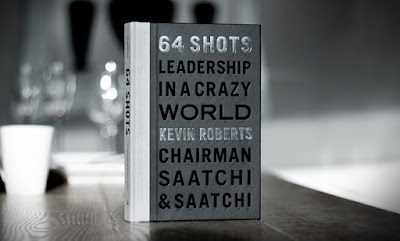 64 Shots: Leadership in a Crazy World by former Saatchi & Saatchi Chairman Kevin Roberts could be retitled 64 Shits, as the author essentially shat out turds of wisdom on leadership.

Unfortunately, the book offers nothing fresh or original. Roberts simply regurgitates the perspectives of business experts like Peter Drucker and Tom Peters, repackaging the insights with his own alliterations and acronyms. Plus, he makes lots of tired sports analogies, embracing his personal obsession with Rugby. To complete the dearth of newness, Roberts closes by revisiting his Lovemarks concept.

Roberts’ resignation from Saatchi & Saatchi was ignited by commentary deemed sexist, and the book certainly doesn’t help his cause with its lack of lady lauding. The truth is, however, that White women thrive at the White advertising agency Roberts once led, making his claim—“the fucking debate is all over”—somewhat accurate. Hell, White women seem to be doing swell at the White enterprise that recently hired Roberts too.

On a related tip and flipside, Roberts’ book makes ample references to Black icons including Dr. Martin Luther King, Jr., Muhammad Ali, Nelson Mandela and Colin Powell. Roberts marveled, “How many organizations start each day with the rolling thunder of inspiration? Dr. Martin Luther King, Jr. did not say ‘I have a mission statement.’ He didn’t talk about rules or tactics. He talked about a moral imperative, about the Promised Land. He had a dream.” Yes, and idiots like Roberts slept on the dream, failing to embrace progressive change, marginalizing minorities and perpetuating exclusivity in a crazy advertising industry that desperately needs leadership with vision. Despite his patronizing faux reverence for equality fighters, Roberts is an Old White Guy, culturally-clueless hypocrite and discriminatory douchebag. On that point, the fucking debate is all over.