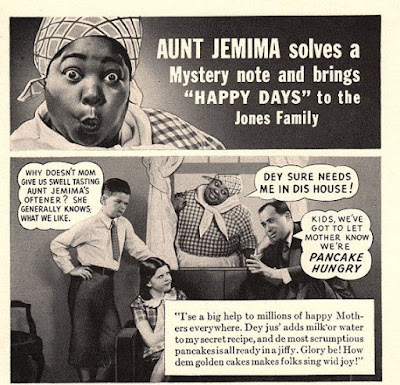 Adweek reported Dan Gasby, TV executive and the spouse and professional partner of B. Smith, is going after Aunt Jemima. Actually, he’s going after PepsiCo, demanding that they finally dump the iconic pancake maker. “One hundred and twenty four years ago that product was created,” griped Gasby. “They used nasty grains, and they had freed slaves [to promote it], and it’s still a modern-day, 21st-century company. And someone who pours that syrup [or mix], they’re pouring slavery out of a box.” If Gasby succeeds in his crusade to crush Aunt Jemima, it will probably make Annie the Chicken Queen and The Pine-Sol® Lady really nervous. 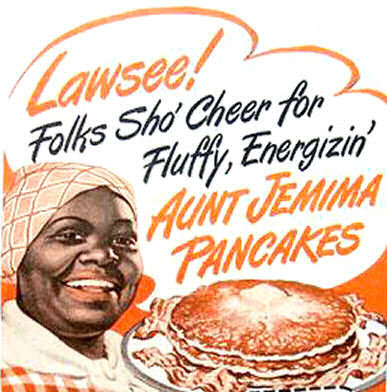 B. Smith’s Husband Is Launching a Petition Demanding the Aunt Jemima Brand Change Its Name

Seeks to drop the mascot as well, thereby setting the character ‘free’

For well over a century, Aunt Jemima has been among the most successful and recognizable brands of pancake mix and syrup on grocers’ shelves. Starting today, however, it might just get flipped on its head.

A new Change.org petition, announced this morning, demands the company get rid of its brand name and mascot and “set Aunt Jemima free,” in the words of Dan Gasby.

Gasby, a successful TV executive and the husband and business partner of the model-turned-entrepreneur B. Smith, started the petition after his previous efforts to get the Pepsico-owned Aunt Jemima to discard its name and mascot failed. Gasby believes the Aunt Jemima name and character are enduring vestiges of racism and slavery that have no place on store shelves in 2017.

“For 124 years, [that product] has been the very epitome of African-American female humiliation,” Gasby said. “You can’t tell me Aunt Jemima is positive.”

PepsiCo has not responded to an email and a telephone message requesting comment.

Gasby’s campaign, while newly public, has been years in the making. About a decade ago, Gasby and his wife decided to go shopping in some New York bodegas, those dingy little cigarette-and-beer stores that in many of the city’s poorer neighborhoods are the only grocery-shopping options available. The couple had long passed the point where they needed to do such chores (much less in bodegas), but they were considering getting into the grocery business themselves and figured they’d do a little research.

Instead, they found a cause.

When a young black woman the couple was watching put a box of Aunt Jemima pancake mix into her basket, Smith—an actress, restaurateur, chef and among the most elegant black women of her generation—was disturbed. So she approached the young lady. “I just want to ask you something,” Smith said. “You just bought this product—do you know what it stands for?” The woman replied that Aunt Jemima was “a product that stands for us being blacks.”

“My wife was shocked,” said Gasby, still recalling the event clearly. “And from that day on, we said to ourselves that we’d try to make a difference.”

Gasby, co-owner of the B. Smith lifestyle brand, chose today, June 19 or Juneteenth, the day that commemorates the emancipation of African-American slaves, as the launch date for the campaign. He hopes the symbolism will spark a greater sense of urgency and garner more support.

“One hundred and twenty four years ago that product was created,” Gasby said. “They used nasty grains, and they had freed slaves [to promote it], and it’s still a modern-day, 21st-century company. And someone who pours that syrup [or mix], they’re pouring slavery out of a box.”

In 1889, entrepreneurs Chris Rutt and Charles Underwood of the Pearl Milling Company introduced a new brand of ready-mix, self-rising pancake flour called Aunt Jemima—a name Rutt, a newspaperman by trade, had heard at a minstrel show in a song performed by a singer in blackface. After the R.T. Davis Milling Company purchased the brand in 1890, it hired Nancy Green, who’d been born a slave in Kentucky’s Montgomery County, to portray Aunt Jemima in the company’s promotions. The perennially smiling, bandana-wearing Green was paid to be a caricature, and the resulting archetype, which passed to the ownership of Quaker Oats in 1925, survived long after Green’s death in the form of an illustration of the character on the packaging.

Apart from the cultural baggage of the name itself, the Aunt Jemima character has been a liability for the brand for decades. Though the rendering has been mainstreamed over the years—losing the bandana, shedding the housedress and appearing in pearl earrings—Aunt Jemima is still in many people’s eyes a “mammy”—a stereotypical domestic servant in the white households of the antebellum era.

But in Gasby’s view, updating the character did nothing to address what he sees as the foundational offensiveness of the brand name overall and the character in particular.

“You could make her look like Doris Day in dark chocolate—and you can quote me on that—[or] you can bob her hair, and she could look like she’s in the Daughters of the American Revolution,” he said. “But walk up to a black woman and say to them, ‘You remind me of Aunt Jemima!’ and see what they do to you. Walk into the middle of a room of a group of black women and say, ‘You know, I just want to say I hope you live up to the standards of Aunt Jemima,’ or, ‘Your little daughter or baby reminds me of Aunt Jemima,’ and see what you get. We’ve become desensitized to systemic racism—but image still matters.”

Gasby explained that he finally turned to Change.org after his own appeals several years ago to PepsiCo to change the Aunt Jemima brand name came to nothing. Ever since then, he said, “it’s been festering with me, and I know my wife was very adamant about it.”

The couple has more personal reasons for launching the petition now. B. Smith was diagnosed with early-onset Alzheimer’s disease in 2013 and is unable to lead the charge on her own. And while the couple’s plans for their own grocery chain didn’t work out, their hopes to change the Aunt Jemima brand still can.

Gasby’s petition isn’t calling for the liquidation of the company. But he does want the name and mascot eliminated and also suggests PepsiCo consider changing the brand name to that of his wife. Not only is she a well known and widely respected black female entrepreneur, but a portion of sales could be donated to the causes of women’s health and brain diseases such as Alzheimer’s.

I guess I just don't understand. I love Aunt Jemima, Uncle Ben, Amos and Andy, Roots and all of my history. Please don't get rid of them. Don't wipe out our history. We are Made in America. We have nothing to be ashamed of. Slavery and everything that has happened since, is our history in this country. Let's learn something from it. Let's teach something from it. Make the connections, don't just try to forget about our history. Aunt Jemima is our great-grandmother. Just like Lucy. Why are we ashamed of her? She was beautiful. Let's not forget how beautiful she still is.