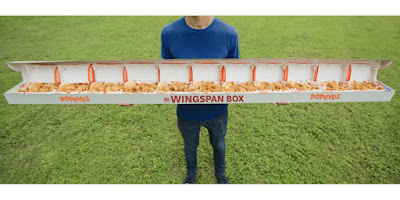 Adweek reported Popeyes created a 7-foot-long box of fried chicken—priced at $74.69—to salute new NBA star Zion Williamson. Gee, Annie the Chicken Queen must have went all-out to accomplish such a feat.

So what better way for Popeyes to celebrate him on draft day than an equally-wide box of chicken wings?

On Thursday, for one day at a single location—Canal Street in New Orleans—the Louisiana-founded fast-food chain offered “The Wingspan Box,” packed with 77 boneless wings, 11 biscuits and 11 servings of french fries (in other words, way too much food for a single human to eat at once, no matter how long-armed).

Priced at just $74.69, the box—created by GSD&M—is now, for countless stoned teenagers across the country, the one that got away.

Williamson, for his part, landed that night with the Pelicans—netting the first pick of the draft, as was expected, and confirming that he’s headed for the Big Easy.

So maybe Popeyes will rustle up one more box for the welcome party.