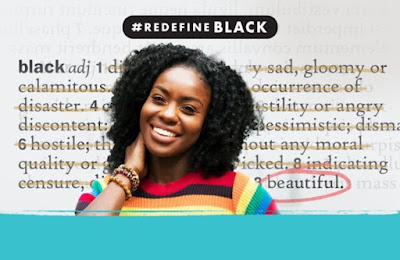 CNBC reported on the latest diversity/divertsity desideratum from Procter & Gamble, whereby the White advertiser is asking dictionaries to revise the definition of the word “Black” as part of its My Black is Beautiful campaign. No word if P&G needed to hire consultants of color to hatch the concept. Although dictionaries should also consider redefining “PR” as patronizing ruse when associated with corporations like P&G, as the monolithic marketer and manufacturer will undoubtedly leverage the scheme to collect ADCOLOR® trophies and Cannes Lions. Meanwhile, P&G will continue to minimize the use of “Black” as a qualifier for the advertising agencies it employs.

Procter and Gamble wants to redefine the word ‘black’

Procter & Gamble’s “My Black is Beautiful” campaign is asking dictionaries to rethink their definitions of the word “black.”

“My Black is Beautiful,” a campaign for black women the consumer goods giant formed over a decade ago, says dictionaries too often prioritize terms such as “evil” or “dirty” over those that describe the word as it relates to identity and skin color. The push is called #RedefineBlack and has a petition on DoSomething.org.

P&G’s latest effort joins other recent campaigns in which brands are taking stands on cultural and political issues. Last year, Nike ran a campaign featuring Colin Kaepernick that stirred controversy, and P&G has run campaigns of its own that have sparked conversation, including a Gillette ad that weighed in on the #MeToo movement. And this might be why: Nearly two in three people say they choose, switch, avoid or boycott a brand based on its stand on social issues, according to a 2018 Edelman Earned Brand report.

Lela Coffey, brand director of multicultural beauty at P&G, said “My Black is Beautiful” has always been focused on promoting a more positive perception of blackness and spotlighting bias. When the group started to think about the dictionary definitions, she said they discussed how associating darkness with badness can lead to racial prejudice.

“We talked with some professors about the issue and the effect that words have on people,” Coffey said. “We started to wonder if this was something we could change.”

In the section for “black” on Merriam-Webster’s website, for instance, an example of word usage that reads “his face was black with rage” is placed higher on the definition page than any mention of “black” as it pertains to identity or skin color.

Dictionary.com is already planning to update its definition because of the campaign. The website posted a blog Wednesday explaining that it would be making updates and revisions that will roll out on the website later this year.

“If you look on Dictionary.com today, the adjectival sense of ‘Black’ that refers to people is the third sense on the page, ” it says. “Currently this definition sits right above a definition that reads ‘soiled or stained with dirt.’ While there are no semantic links between these two senses, their proximity on the page can be harmful. It can lead to unconscious associations between this word of identity and a negative term. These are not associations we want anyone to get from Dictionary.com, and so we will be swapping our second and third senses on the page.”

Dictionary.com will also capitalize “Black” in the entry when it’s used in reference to people, which it says is considered a “mark of respect, recognition and pride.” That’s one point Coffey said the organization is asking dictionaries to make, along with updating the entries with references or usage of the word “black” to phrases black people actually use to identify themselves. She gave the example of “Black is beautiful” as one she hopes will be included.

P&G campaigns in recent years have touched on subjects such as celebrating the LGBTQ+ community and discussing racial bias. “My Black is Beautiful” was also behind development of “The Talk,” a video that depicts conversations black parents have with their children to prepare them for racial bias they may face.

“Consumer expectations are changing,” said Damon Jones, P&G’s vice president of global communications and advocacy. “Consumers are actively looking for companies to take a role. The majority of consumers expect the brands they choose to take a stand on social and environmental issues. When we look at forming genuine and authentic relationships with our consumers, this is what [they] expect.”

Some of those campaigns have sparked controversy. But even when people disagree, that’s still beneficial, Coffey said.

Jones added that some of these campaigns have subject matter pertaining to one group but in practice have a wider reach than that.

“A number of the campaigns may resonate with one consumer group,” he said. “But really, all consumers want everyone else to be treated fairly.”