14674: FCB And NIVEA Are A Perfect Prejudiced Pair. 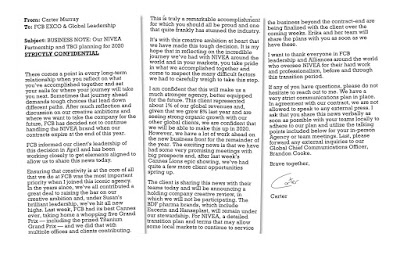 Advertising Age reported FCB is separating from NIVEA, citing tense relations including a homophobic remark from the client allegedly made during a phone call. Hey, FCB is hardly innocent in the relationship, having once caused problems for the client by producing a racist advertisement. Seems like the two make a complete culturally-clueless couple.

FCB parts with Nivea amid rising tensions, including allegations of homophobic remark

By Lindsay Rittenhouse and Jack Neff

Interpublic’s FCB is parting ways with Nivea amid rising tensions on the global account, including allegations that the brand rejected an image that the agency pitched showing two men’s hands touching, according to people familiar with the matter. A person on the client team allegedly remarked, “we don’t do gay at Nivea” on a call with FCB creatives, one of which is gay, the people said.

FCB declined to comment and spokespeople for Beiersdorf in the U.S. and Germany did not return requests for comment.

FCB announced to its employees in an internal memo obtained by Ad Age that it will resign its global Nivea account when contracts expire at the end of the year. The memo did not address the alleged remark. Had it not resigned, FCB would have been put into the position of defending the account. Nivea will soon be announcing a “holding company creative review,” according to FCB’s memo, which came from FCB Global CEO Carter Murray.

The body care brand is owned by Hamburg, Germany-based Beiersdorf. Other Beiersdorf brands, including Eucerin and Hansaplast, will remain under FCB, according to Murray’s memo (included in full at the bottom of this article).

Agencies that now make up the FCB network (which merged with Draft Worldwide in 2006 and rebranded as FCB in 2014) have worked with Nivea for more than 100 years, according to the people familiar with the account. But people close to the account said client-agency tensions had been mounting since 2017. It is unclear exactly when the alleged “we don’t do gay” remark was made. Murray in the memo stated that FCB informed Nivea of its decision to resign the account in April.

“There comes a point in every longterm relationship when you reflect on what you’ve accomplished together and set your sails for where your journey will take you next,” Murray stated in the memo. “Sometimes that journey ahead demands tough choices that lead down different paths.” He stated that the decision follows “much reflection and discussion on our creative ambitions.”

He added: “It is my hope that in reflecting on the incredible journey we’ve had with Nivea around the world and in your markets, you take pride in what we accomplished together and come to respect the many difficult factors we had to carefully weigh to take this step.”

According to Murray’s email, Nivea represents 1 percent of the agency’s global revenue. “We are confident that we will be able to make this up in 2020,” he added.

FCB Inferno in London has done a significant amount of work for Nivea. Most recently in April, the agency released a “Mr. Sun” campaign for Nivea Sun and Cancer Research U.K. to encourage people to wear sunscreen.

According to estimates from R3 Co-Founder and Principal Greg Paull, Nivea spends on average $300 million on measured media globally a year. Kantar placed Nivea’s measured media spend at only $21.8 million in the U.S. According to people familiar with the situation, the Beiersdorf account that will remain under FCB only generates about $2 million for the agency.

The allegation regarding the gay remark comes during Pride Month, a time when more brands than ever are promoting and donating to LGBTQ+ causes and events in celebration. Retailers including J.Crew, Kenneth Cole, Under Armour, Gap, Calvin Klein, American Eagle, Nordstrom, Express and DKNY all released their own Pride collections. Disneyland held its first Pride parade at Disneyland Paris. Verizon is celebrating Pride with a digital campaign featuring real stories of people coming out to their relatives to show how difficult those conversations were.