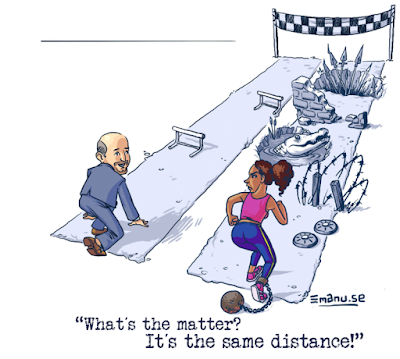 It is perhaps the biggest job of the modern corporation—to find a synthesis between justice and dignity, between equality of opportunities and social status and function.

The modern corporation as a child of laissez-faire economics and of the market society is based on a creed whose greatest weakness is the inability to see the need for status and function of the individual in society. In its refusal to concern itself with the unsuccessful majority, the market society was a true child of Calvinism with its refusal to concern itself with the great majority that is not elected to be saved. Following the English philosopher Herbert Spencer, this belief is now expressed usually in the language of Darwinian “survival of the fittest” rather than in theological terms. But this does not alter the fact that the philosophy of the market society only makes sense if the unsuccessful are seen as “rejected by the Lord” with whom to have pity would be as sinful as questioning the decision of the Lord. We can only deny social status and function to the economically unsuccessful if we are convinced that lack of economic success is (a) always a person’s own fault, and (b) a reliable indication of his or her worthlessness as a human personality and as a citizen.

ACTION POINT: Provide dignity to everyone you work with simply because they are human beings.

Concept of the Corporation