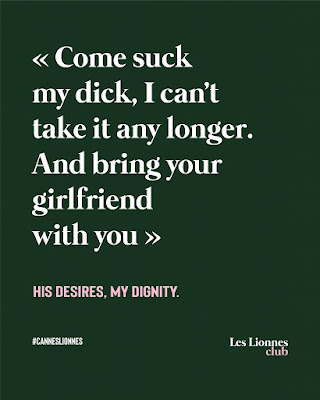 As thousands of agency folk descend on Cannes for the International Festival of Creativity, a French nonprofit called Les Lionnes will hold a separate event to draw attention to the rampant sexism and harassment that continues to plague the industry.

According to the group, it will set up an “off” festival called The Cannes Lions, where members will hand out awards to campaigns not based on their creative merit, but to those that were “designed by agencies that treat women fairly of more … in their top management, creation or production departments.”

To garner buzz and awareness, Les Lionnes recently took to the streets of Paris on the night of June 5 to plaster the walls of the city’s agencies with posters that highlight the kinds of things perpetrators of sexual harassment and unfair treatment have said to their victims. Their “nocturnal operation” was documented and subsequently turned into a short film.

On its website, both victims and witnesses can anonymously share their experiences. Les Lionnes said the effort shines a light on “the violent and iniquitous and unequal truth of an industry that makes women its main casualties over and over.”

Les Lionnes was formed in April by Christelle Delarue, who was on Adweek’s 2019 Women Trailblazers list this year. Delarue is CEO of Mad&Women, a self-described “feminist agency” she founded in Paris in 2012. The agency recently forged a partnership with Unesco to heighten visibility of initiatives aimed at promoting gender equality.