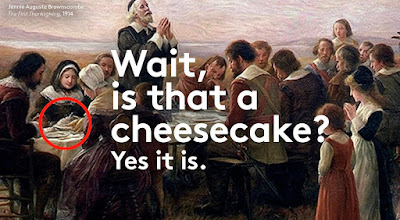 Ask most Americans to picture the first Thanksgiving, and you’re bound to get a heaping helping of anachronisms, driven by four centuries of imaginative depictions of the Pilgrims’ harvest celebration with the Wampanoag tribe.

There certainly wasn’t any bread stuffing or cranberry sauce, and while it’s likely they ate wild turkey, ducks and geese were likely just as central to the menu.

But did they eat cheesecake? That’s the question posed by Philadelphia Cream Cheese and agency Gut in a tongue-in-cheek video about conspiracy theorists called the Cheesecakers Society.

Short answer: No, of course the Pilgrims and Native Americans didn’t eat cheesecake. They didn’t have access to any of the basic ingredients (sugar, cream cheese, sour cream, etc.) except for eggs and butter. Oh, and one other small problem: They didn’t have ovens, either.

But the Cheesecakers Society won’t let those minor setbacks—or conveniently rewritten “facts”—stand in the way of a good conspiracy, and they’re out to prove that cheesecake has always been on the Thanksgiving menu.

The goal of this dairy-driven movement is to put cheesecake (which happens to require buying cream cheese) at the center of dessert planning alongside more traditional options like pumpkin pie.

“At first, we were hesitant about the theory,” says Megan Magnuson, associate director of marketing for Philadelphia. “But once we saw the evidence and the original paintings, it was clear to us. Cheesecake is 100% the original Thanksgiving dessert. We think. We fully support the honorable Cheesecakers Society in their quest to restore cheesecake to its rightful place at the Thanksgiving table.”

This isn’t the first oddball partnership between Gut and Kraft Heinz-owned Philadelphia. Earlier this year, they created a Bagel That machine that claims to turn anything into a bagel—therefore making it worth slathering in cream cheese—by punching a hole in it.

As one of the few people who owns an actual Bagel That machine, I can verify that it lives up to its intent. But I can also vouch for the importance of cleaning out that metal punching tube before you end up with a core sample of every vaguely edible item your kids feel like carving a hole into. 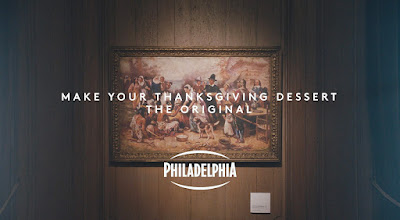