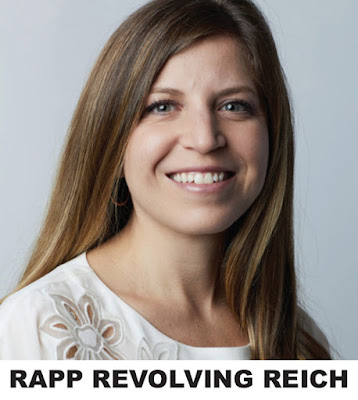 AgencySpy posted on RAPP New York hiring a White woman to serve as its Managing Director, replacing the Black man who landed the job about two years ago. So Shari Reichenberg shifts into the lead position, while Justin Thomas-Copeland moves into a new role—undefined by AgencySpy—within the Omnicom Precision Marketing Group network. Precision is probably a fancy mispronunciation of prison. Why won’t an enterprise run by a CEO allegedly obsessed with integrity simply announce where Thomas-Copeland is specifically being shipped? Um, maybe because the White agency was previously run by a man accused of being a sexist and racist bully. Of course, Omnicom is celebrating since the White holding company retains a Black executive and adds a White woman—it’s a divertsity doubleheader.

RAPP has hired a new managing director for its New York headquarters.

“Shari, a proven, visionary digital marketing leader, understands that the current breadth and pace of industry change requires an agency that can guide and spearhead a customer-centric transformational discussion with its brand partners,” Scognamiglio said in a statement. “Her strengths lie in her abilities as both a strategic thinker and an operational lead – and having her at the helm of our New York team is a tremendous way to move into 2020, and beyond.”

Reichenberg joins RAPP from Prophet, the digital consultancy with a client roster including Chick-Fil-A, MetLife, T-Mobile and Regal Cinemas, where she served as president for the past year. Prior to joining Prophet, she spent over seven years at Ogilvy, most recently as executive strategy director, head of U.S. customer engagement following years directing engagement strategy.

“At a time when brands’ abilities to build relationships with their own customers is more critical to their success than ever, RAPP’s heritage of understanding and celebrating individuals makes it an essential partner to any modern CMO,” Reichenberg said in a statement. “I couldn’t be more excited to join this outstanding team of creative, strategic and analytically- and tech-savvy thinkers and makers.”