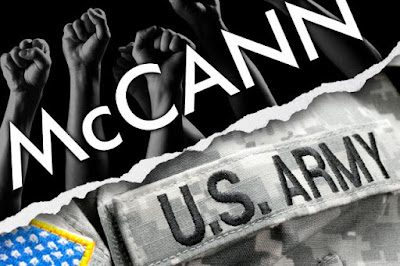 Advertising Age reported McCann Worldgroup is officially protesting to the Government Accountability Office after being cut from the review to retain the guesstimated $4-billion-over-a-decade U.S. Army account, which the White advertising agency has serviced since 2005. According to Ad Age, a memo from McCann Worldgroup Chairman-CEO Harris Diamond whined, “We have recently been notified by the government contracting officer, who is managing the mandated Army review, that we were disqualified due to technical issues related to our proposal. Therefore, we were not invited to the oral presentations.” The memo also stated that McCann was whacked before the proposal reached “our clients [the Army] who have been quoted in support of our work and relationship… [and] are not being given the opportunity to read or review our proposal. We believe the contracting officer’s decision is wrong and we are protesting.” Gee, imagine if every minority advertising agency “disqualified” from a pitch for “technicalities” lodged a formal protest. It would require an army of lawyers just to read the gripes. For McCann Worldgroup to complain about losing a government account that it has held for over a decade inspires delivering a truth well told: All is fair in love and war.

Charging that its elimination from an agency review for the U.S. Army’s business was “an arbitrary and capricious decision,” McCann Worldgroup has filed a formal Government Accountability Office pre-award bid protest against the Army.

In January, the U.S. Army released a request for proposals for its advertising and marketing business. An Army representative said at the time that the mandated review “estimates the contract ceiling to not exceed $4 billion” over a period up to a decade.

McCann Worldgroup, which includes Weber Shandwick and UM, has held the business since 2005 and reaps an estimated $30 to $40 million in annual revenue from the account. The Army last extended its contract with McCann Worldgroup in November 2015 for another 18 months.

But now McCann has been cut from the new review.

“We have recently been notified by the government contracting officer, who is managing the mandated Army review, that we were disqualified due to technical issues related to our proposal,” McCann Worldgroup Chairman-CEO Harris Diamond said in an email to employees that was obtained by Ad Age. “Therefore, we were not invited to the oral presentations.”

The agency, the email said, was disqualified before its proposal reached “our clients [the Army] who have been quoted in support of our work and relationship, are not being given the opportunity to read or review our proposal. We believe the contracting officer’s decision is wrong and we are protesting.”

Some of the reasons cited in the bid protest, filed in June, include the contracting officer’s “failure to read McCann-Erickson’s entire proposal” and “incorrect and inexplicable assertion that McCann-Erickson is not registered in the System for Award Management (SAM),” or the system used by the government in hiring contractors, even though it has been a longtime agency for the U.S. Army.

According to the document, McCann alleges that the Army’s contracting officer made a “superficial review” of its proposal and “inexcusably failed to correctly check the SAM database.” McCann refers to the SAM issue in the protest document as “one of the most egregious errors in the review.”

The Army also allegedly disqualified McCann, according to people with knowledge of the matter, for several technical errors, such as using a PDF rather than an Excel sheet in the proposal.

Representatives from the U.S. Army did not return calls for comment by press time.

“We think we’re right on the merits,” the executive told Ad Age, “but equally important, we think we’ve done really great work for the U.S. Army. We’ve met everything and have been honored by them for performance over the years, so we hope to get through this process.”

In a GAO protest, a government agency – the Army in this case – cannot award the business until the protest is ruled on, which must occur within 100 days. The start date for the new contract is March 30, 2018.

“There is simply no logical reason to rush to exclude strong proposals given the time available to select the best offeror,” the protest document says.

McCann was told about being eliminated from the process via email rather than on the phone or in a meeting, according to people familiar with the situation.

“We are disappointed in the Contracting Officer’s decision,” said a McCann spokesman in a statement. “We are enormously proud of the work we have done with our client partners over the past 11-plus years and hope we will have the opportunity to continue to help the U.S. Army in meeting its important recruiting mission and goals.”

Last month when McCann Worldgroup was named the No. 2 Most Effective Regional Network at the 2017 North American Effie Awards, Mark Davis, Deputy Assistant Secretary of the Army for Marketing publicly praised McCann. “When two great teams, like the Army and McCann, partner together you can accomplish amazing things and make a difference,” he said then in a statement. “It is our honor to share with McCann Worldgroup this prestigious acknowledgement of the effectiveness of our efforts by the Effie Awards.”