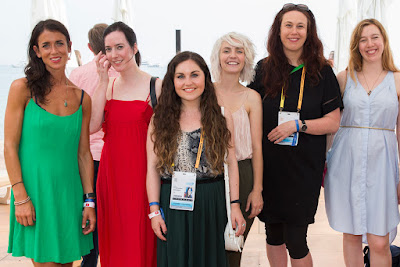 Campaign published a story titled, “Say yes to action on gender diversity: Six women on their first Cannes Lions”—featuring perspectives from the six GoDaddy Scholarship for Women in Technology winners. The accompanying photograph of the winners (depicted above) indicates quite clearly who really benefits from gender diversity schemes—aka diverted diversity and the White women’s bandwagon. That the scholarship came from GoDaddy, a brand that has historically produced notoriously sexist advertising, underscores the outrageousness of it all. Indeed, this sort of patronizing propaganda is the equivalent of major banks producing diversity advertising after getting busted for discriminating against racial and ethnic minorities seeking home loans.

I keep hoping that there's going to be a breaking point soon when the ad industry or at least clients look around and realize that all their recent diversity efforts are helping white women move up the ladder, and white women only.

It's frustrating that everything and everyone EXCEPT people of color are now cheered on and supported under the banner of diversity (I'm talking about all the press and efforts surrounding ageism, sexism, etc. lately) by agencies that have been pretty damn racist for decades.

Is anyone ever going to call them out on maintaining the status quo by giving white women a leg up in the name of diversity, while blocking the ladder for anyone who's black or brown?