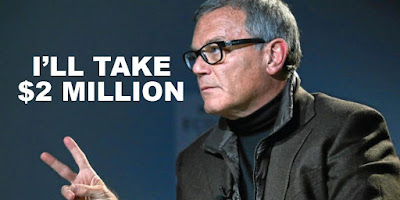 Advertising Age reported WPP has access to $747 million in credit from the U.K. government as part of a coronavirus-related financial assistance initiative. Now, it’s a safe bet that former WPP Overlord Sir Martin Sorrell will lobby for a cut of that loot.

WPP CEO Mark Read recently told The Telegraph that the holding company had applied for the CCFF borrowing program from the Treasury and Bank of England. According to one person close to the matter, WPP was approved for the borrowing but had not yet dipped into the funds.

According to WPP filings, the holding company has £4.4 billion ($5.5 billion) of liquidity and £2.8 billion ($3.5 billion) in “other facilities,” which includes government funds. The person close to the matter says the “other facilities” pool is available to WPP should it need to access it, but it hasn’t yet.

The U.K. government announced in March a series of temporary measures, including the CCFF program—under which, “firms making a material contribution” to the U.K. economy can borrow money for up to a year on terms comparable to those available before the COVID-19 economic shock and then use the money “to pay wages and suppliers, even while experiencing severe disruption to cashflows.”

WPP, the world’s largest agency holding company, has its headquarters in London, but it gets most of its business from outside the U.K. WPP in 2019 generated 12.8 percent, or $1.77 billion of its $13.8 billion worldwide revenue less pass-through costs, from the U.K., according to WPP’s year-end financials.

Some question whether the CCFF program was really established to help a company like WPP.

“The large holding companies have the market to support them through realigning their businesses for growth,” says Greg Paull, co-founder and principal of R3. “It doesn’t seem appropriate that governments should be supporting them in the same manner that they are investing in truly local small businesses.” The holding company declined to comment. However, someone with knowledge of the situation said the U.K. government has separate programs providing COVID-related relief for small and large businesses, so one does not take away from the other.

According to The Financial Times, many U.K. retailers have had their applications for the CCFF loan rejected. The FT reports, among the larger publicly traded retailers, only Next, Marks and Spencer and Associated British Foods, the owner of Primark, have received the facility. Richard Branson’s Virgin Atlantic attempted to secure £500 million from the CCFF but was denied, The Guardian reports.