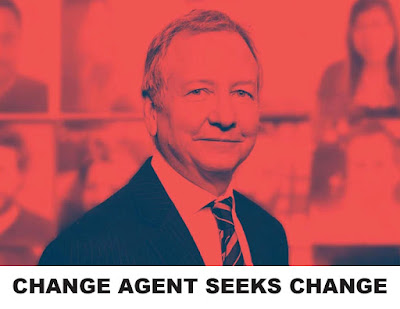 Advertising Age reported Ogilvy Worldwide CEO John Seifert will leave the White advertising agency in 2021 as part of a succession scheme driven by WPP CEO Mark Read—who has consistently and effectively removed the success from succession during his stint behind the wheel. Seifert revealed he and Read agreed earlier in the year “that we should begin the process of searching for my eventual successor, knowing that this process takes time and thoughtful engagement with potential candidates internally and externally.” Ogilvy drones can take solace in knowing that—given the restrictions posed by the COVID-19 pandemic—their next leader will be chosen through “thoughtful engagement” via Zoom interviews. Hey, the impending appointment provides Seifert an opportunity to live up to his ADCOLOR® Change Agent title.

Ogilvy Worldwide CEO-Chairman John Seifert will be departing the agency after nearly 41 years. The move, effective in 2021, is part of a succession plan helmed by WPP CEO Mark Read, says Seifert, who noted he will lead the agency until a successor is appointed.

“In June I will have served Ogilvy for 41 years, the past five as worldwide CEO,” Seifert said in a statement. “I have worked closely with Mark Read since his appointment [as CEO] in 2018 on leadership development and succession planning across The Ogilvy Group, and that includes me as well.”

Seifert said it was decided earlier this year with Read “that we should begin the process of searching for my eventual successor, knowing that this process takes time and thoughtful engagement with potential candidates internally and externally.”

“It’s been an extraordinary privilege to serve Ogilvy since joining the company as a summer intern in 1979,” Seifert said. “I love this company with all my heart and will be forever supportive of its success.”

Seifert took over as worldwide CEO and chairman of Ogilvy, succeeding Miles Young, in 2016. When he took on the CEO role, Seifert inherited a host of legacy issues at Ogilvy similar to those that have plagued most traditional creative agencies in recent years. In 2018, Seifert led a rebrand of the agency, changing its name from Ogilvy & Mather to just Ogilvy. A year earlier, Seifert appointed a new global leadership team that included naming New York CEO Lou Aversano to CEO of the U.S.

In January of this year, Seifert announced in an internal memo obtained by Ad Age that Ogilvy would be undergoing another large-scale restructuring that would place more responsibility with regional leaders. As part of that effort, Ogilvy parted ways with U.S. Chief Creative Officer Leslie Sims. At that time, the agency laid off 80 employees across nine offices due to “a challenging second half in 2019 and a cautious financial outlook for full-year 2020,” Seifert said in the memo.

On an episode of Ad Age Ad Lib that same month, Read acknowledged the pressures unique to the holding company, as well as those affecting the larger industry. “If I have one frustration, it’s still somehow that we’re seen as an old-fashioned advertising agency that’s being disrupted by Google and Facebook,” he said.

Read said 2020 would see WPP focusing on returning to growth in North America—surely a goal that has been disrupted by the coronavirus pandemic—and on championing a new creative strategy to sustain the company for the future. He noted that creativity, across its various brands, has not been WPP’s strong suit.

In July of 2019, Seifert came under fire, including from the agency’s employees, over Ogilvy’s work with U.S. Customs and Border Protection. According to recordings of a July 9 meeting with employees leaked to Buzzfeed, Seifert defended the work after employees complained that children had died in CPB custody. Buzzfeed reported that Seifert said the government contract is a “prestigious piece of business” and that the CBP “itself is not a bad organization.”