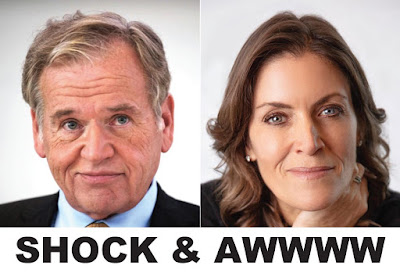 Campaign reported Omnicom President and CEO John Wren—while speaking on the holding company’s Q1 earnings call—took a moment to rip former DDB Global CEO Wendy Clark for bailing out and joining Dentsu Aegis Network. Wren remarked, “We were a bit shocked and put off when Wendy Clark decided that she was going to move on in the middle of a crisis.” It wasn’t clear, however, if Wren’s “crisis” was in reference to the COVID-19 pandemic or DDB’s business woes, which include major client losses.

But honestly, why is Wren whining? Over the years, the man has demonstrated that people and places are interchangeable cogs in the Omnicom outhouse. Indeed, the holding companies have completely commoditized creativity and cultures—the latter remaining predominately Caucasian despite the mumbo jumbo mouthed by Wren and Clark.

Perhaps Wren was feeling cranky because Clark’s hasty exit actually stalls his vision for gender equality. Or maybe Wren is fearing Maurice Lévy will send a résumé and request a reunion via filling the vacant position.

Omnicom CEO: ‘We were a bit shocked and put off when Wendy Clark decided to move on in the middle of a crisis’

John Wren said Chuck Brimer was able to step in with limited disruption “irrespective of whatever the behavior of his predecessor was.”

The CEO of Omnicom Group admitted “we were a bit shocked and put off when Wendy Clark decided to move on in the middle of a crisis” during Tuesday’s Q1 earnings call.

John Wren was addressing an investor question about the network’s plan to safeguard talent from leaving amid sweeping job reductions, salary cuts and furloughs.

He said: “We entered 2020—or DDB did—with a difficult situation because they lost several large clients. Thankfully to other parts of Omnicom. We were a bit shocked and put off when Wendy Clark decided that she was going to move on in the middle of a crisis.

“But we were able to recover with no interruptions at all, because Chuck Brimer, who had previously been the CEO and the chairman of the company was with us and ready to step back in and he’s done a magnificent job, irrespective of whatever the behavior of his predecessor was.

“So I feel that, not only are we in a fabulous situation when it comes to our employees, we’ve done a terribly good job of making certain we can replace every single one of us—and it’s truly a team effort.”

Omnicom leadership explained that cost-cutting measures are not about removing staff from accounts with less business amid COVID-19, but instead, making an evaluation of the best talent and placing underperformers on the list of terminations first.

“People are free to do as they want,” said Wren, responding to an investor who pressed him on competitors snapping up talent. “I’m not any more concerned than I would be prior to the crisis about our staff choosing to work for omnicom over one of our competitors.

“We’ve been very careful and thoughtful—unlike in past crises—in communicating with our employee base and letting them know what our priorities and concerns are and what to expect our actions will be. And I find that when you do communicate with your employees that way it creates a dialogue and a trust level which is terribly important to get us through this crisis.

“So I will be shocked if there’s any depletion of talent in Omnicom. I quite expect to be able to do the opposite of what you’re suggesting and probably hire people who we think are talented from some of our competitors after this settles down.”

It decreased to $3,406.9 million from $3,468.9 million compared to the same period last year, primarily due to the negative effects of foeign exchange rates and disposition activity in excess of acquisitions, said the network during an earnings call on Tuesday.

The report comes as leadership issued a gloomy forecast amid COVID-19 economy chaos.

Part of the company’s statement read: “The COVID-19 pandemic has significantly impacted the global economy. Public health efforts to mitigate the impact of the pandemic include government actions such as travel restrictions, limitations on public gatherings, shelter in place orders and mandatory closures. These actions have negatively impacted many of our clients’ businesses and in turn clients have reduced or plan to reduce their demand for our services.

“As a result, we experienced a reduction in our revenue beginning late in the first quarter of 2020, as compared to the same period in 2019, and is expected to continue for the remainder of the year. Such reductions in revenue could adversely impact our ongoing results of operations and financial position and the effects could be material.”

Omnicom highlighted that while it expects the pandemic to “affect substantially” all of its clients, certain industry sectors have taken a more immediate and significant hit than others, including travel, lodging and entertainment, energy and oil and gas, non-essential retail and automotive.

The statement continued: “Clients in these industries have already acted to cut costs, including postponing or reducing marketing communication expenditures. While certain industries such as healthcare and pharmaceuticals, technology and telecommunications, financial services and consumer products have fared relatively well to date, conditions are volatile and economic uncertainty cuts across all clients, industries and geographies.

“Overall, while we have a diversified portfolio of service offerings, clients and geographies, demand for our services can be expected to decline as marketers reduce expenditures in the short-term due to the uncertain impact of the pandemic on the global economy.

“As a result of the impact on our business, each of our agencies is in the process of aligning their cost structures, including severance actions and furloughs to reduce the workforce, and tailoring their services and capabilities to changes in client demand.”